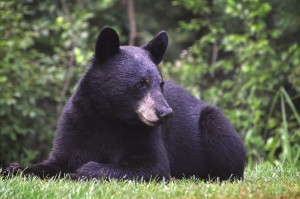 Rob Hussey provided this photo of a bear in his backyard in Wells this summer.[/caption] By Regional Wildlife Biologist Scott Lindsay Though it is no secret that southern Maine has a healthy and productive deer population, it may come as a surprise to some that black bear are regulars as well. Each year hunters in York, Cumberland and southern Oxford counties register a few dozen bears even though these counties are considered to be on the fringe of the black bear's range in Maine. This area is quite rural with lower residential and road densities and plenty of forested habitat. [caption id="attachment_1127" align="alignright" width="225"] 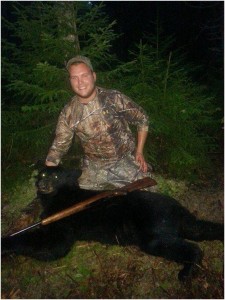 Matt Roberts had a successful bear hunt at Vernon Walker WMA this fall.[/caption] There are opportunities to hunt, with permission, on private lands as well as several MDIFW owned Wildlife Management Areas (WMA). The Wildlife Managemenent Areas that are most suitable for bear hunting include the 5700 acre Vernon Walker WMA in Shapleigh, the 4000 acre Steep Falls WMA in Standish, the 5900 acre Sanborn WMA in Brownfield and the 1000 acre Morgan Meadow WMA in Raymond. Additionally, wildlife biologists, in coordination with Warden Service, have taken on the management of a limited number of bait permits for a large commercial landowner in western York County. This landowner requested our assistance due to the increased bear hunting activity occurring on their land. Bear hunting success rates will be lower in this part of the state, but many southern Maine hunters have justified this due to the lower cost and logistics of hunting closer to home. Regional IFW staff has noted the increase in requests for bear baiting permits for WMA’s in this region over the last decade. This has coincided with an increase in the reported observations of bear in southern Maine, including those towns along the coastal plain.
Categories