How to Help an Injured Heron - Safely! 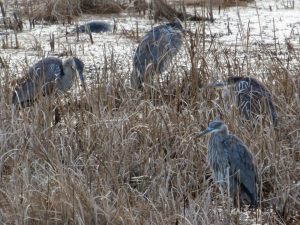 These four juvenile Great Blue Herons were spotted in Damariscotta on December 6th. The photographer, Stacey Keefer, said there was also a fifth with this bunch.

There is a small portion of our Great Blue Heron population that overwinters in Maine, but all those I have seen or heard about are juveniles.  Quite often those that stay are not in great condition and may even be starving. A juvenile great blue heron captured accidentally by a beaver trapper this November was not injured in the process but was brought to Avian Haven - one of Maine’s top-notch bird rehabilitators - because it was noticeably thin.  After several days of nourishment, it was ready to release, however, it died in transit to the release site.  A necropsy revealed an enlarged liver, something that was not detectable at Avian Haven through routine examination and radiographs. Recently, a juvenile Great Blue Heron was reported in Topsham that visibly seemed ill or injured.  The photo of this bird on the Maine Birds Facebook page drew a lot of comments out of concern for the bird. Most everyone referred the person to Avian Haven.  This was the correct thing to do and Avian Haven and their volunteers did get involved, but what should you do while waiting for a response from an expert? I thought it may be worthwhile to outline what should be done when an ill or injured heron is spotted.  By following these recommendations, you may be able to save the bird and yourself from personal injury: