Lessons from a Lynx 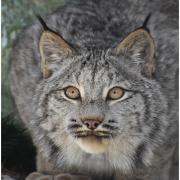 Often referred to as the “Gray Ghost of the North,” due to its perceived elusiveness, the Canada lynx is more fittingly described as calm, aloof, and surprisingly tolerant of human presence. Their long legs and thick-furred paws act like snowshoes to hunt in deep snow and their eyes have mirror-like cells allowing an increase of light available for the lynx to see at night. In addition to these adaptations, the lynx has a keen sense of hearing and smell, making them exceptional predators and equipped at living in deep snow environments.

Checking in on Peregrine Chicks 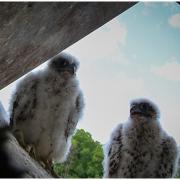 The keen eyes of one of the many MDIFW peregrine falcon surveyors, Trish Berube, and the partnership of Chinburg Properties, led to the discovery of a female incubating eggs in a 14-year-old nest box on a historical building in Lewiston. The exact location of this nest box is being kept private at this time to limit disturbance to the young until they fledge early summer.
Categories

As we emerge from the challenges brought on by the pandemic, with a renewed and growing interest in outdoor recreation, including fishing, we find ourselves in another year of low flows and water levels due to the very early onset of a drought; the second year in a row.  Most areas of Maine are suffering from below-average rainfall and lower than normal water conditions.  Anglers are reminded to consider these conditions and take some personal responsibility when fishing for coldwater fish species such as trout and landlocked salmon.