Harper, the GPS-tagged Great Blue Heron, has done it again!  Last fall she impressed us with her 38-hour nonstop flight over the open ocean.  This year, she has gone above and beyond, flying for 68 hours and 2,030 miles nonstop from Quebec to Georgia.  This year’s flight path went further east almost to Bermuda before turning west again towards the US.  As with any wonder of nature, her flight has sparked quite a few questions from you - and me!  Last year, we addressed many of these same questions in a blog post.  Be sure to check that out if your questions are not answered below.

How far, high, fast, and for how long did she fly?

Total distance nonstop = 2,030 miles; she then gradually made her way to the Everglades in Florida.  From there, we will need to see where she ends up for the winter.

Total time in flight = 68 hours; we know from her transmitter that she was flying that whole way.  Her transmitter has an accelerometer which records her activity level, similar to a FitBit.  Below is the data from the accelerometer.

Flight speeds during nonstop flight = average was 33 mph (53 kph); max was 60 mph (97 kph).  Altitude during open ocean flight = average was 761 ft (231 m), max was 4,100 ft (1,249 m) – these values are actually the height above ellipsoid, which requires a conversion to true height above sea or ground level,  and is related to the curvature of the earth at a particular location.  We have found these values have some error, so they need to be considered somewhat relative measures.

The map below depicts her altitude (the larger the circle, the higher she was) and speed (orange/ yellow = fastest speeds; blue/purple = slower speeds).

By graphing the data in various ways, we gain a better sense of her flight patterns. More than 68% of the time her altitude was 1,000 ft or less.  She also tended to fly closer to the ocean surface during nighttime hours. 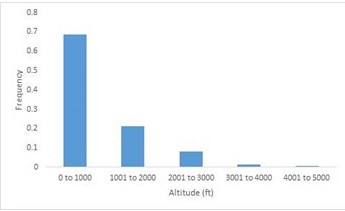 Dolinski (2019) also found that herons increased their flight altitudes as they flew at faster speeds, or more likely, flying at greater altitudes facilitated faster flight. Birds generally fly faster at higher altitudes.  Higher wind speeds may occur at higher altitudes, so it would be beneficial to fly higher when there’s a need to go faster.  Faster flight speed will allow a heron to cover a greater distance in a shorter amount of time, ultimately conserving energy.

Why this flight path?  Is flying over open ocean more efficient?

There were quite a few questions as to why she took the path she did rather than traveling in a straight line, or closer to it.  Our best explanation comes with looking at the prevailing winds when she took off as well as along her route.  We used the ventusky.com website to plug in the date, time, and her approximate altitude at various points along the way to see what the winds were doing at those times and in those locations.  Here are some snapshots showing the wind direction and speed (to view these as a series of animations, click here).

The goal of migration is to get to the desired destination as safely as possible with minimal risk.  With the advances of tracking technology, we know of many landbird species that choose to migrate over open ocean.  While great blue herons are “wading birds,” not “landbirds,” they are also not known to rest on deep open water like a duck or seabird.  The winds in the Atlantic create a natural channel for migration – birds use a tailwind to head south until they reach tradewinds north of the Caribbean that guide them southwestward to island destinations or stopover sites.  The winds over the eastern U.S. land base can be more variable and less predictable.  However, not all of our tagged herons migrate over open ocean for extended periods of time.  On Harper’s northward migration in the spring, she followed the coast stopping multiple times along the way.  This is also likely due to the prevailing wind directions in the northern Caribbean at the time that she departed.  Our other tagged herons have done some over-ocean flying stints but were closer to the coast and took advantage of that proximity to make one or more stops along the way.

Are windmills a threat to Harper or other Great Blue Herons?

Both onshore and offshore wind energy development has expanded globally, and with that comes the possible risk to resident and migratory birds that use these areas.  There are very few documented great blue heron collisions with wind turbines.  A University of Maine honors student, Lauren Dolisnki, examined the height of foraging flights of five GPS-tagged herons in Maine during the breeding season to determine how landscape factors influence flight altitude and how flight altitude relates to the heights of wind turbines.  She found that 43% of heron flight altitudes fell within range of turbine heights in Maine, implying some risk of collision. However, herons increase flight altitude as elevation increases, implying avoidance of obstacles.  Impacts to herons from offshore wind has not yet been studied, however there is an effort underway to examine the flight data from our GPS-tagged herons to assess possible effects from proposed offshore wind and to inform the siting of turbines.

Why does she migrate so far south and not just winter somewhere a bit closer like Chesapeake Bay or the Outer Banks?

Some great blue herons don’t migrate at all, some move short distances to find better foraging sites, and others like Maine’s tagged herons go the opposite end of their range.  Wouldn’t it make the most sense to travel the shortest distance to get to suitable habitat?  Wouldn’t this save time and energy and be less risky?  Great blue herons have a different migratory pattern, called leap-frog migration, in which the most northerly breeders pass over other populations to winter beyond the more southerly breeders.  The main theory why some birds leap-frog is to avoid competition.  There are already plenty of herons using the areas in the middle latitudes and the resources are likely less limiting further south.

How old is Harper?

We don’t know Harper’s age, except that she is an adult.  Once a heron reaches adult plumage (after their second year), there is no way to assess age.  Since she was captured as an adult, we know she is at least 3 years old now.  The two photos below demonstrate the difference between adult and juvenile plumage.

Where is Harper now, and will she winter in Cuba again?

After making landfall on Cumberland Island National Seashore in Georgia, she gradually made her way to south Florida.  The last data received from her transmitter was on October 20th, from the Everglades.

Sometimes, the transmitter is unable to make a connection through the cell network; most often this is when the cell coverage in an area is poor or the transmitter’s battery is low.  She may currently be outside of cell tower range.  Once she is within range again and the transmitter makes a solid connection, we should receive a “data dump” of data that her transmitter had been logging continuously.  We do not know if she will return to Cuba for the winter.  All of our GPS-tagged birds have wintered in the same locations year after year, so we expect the same from Harper.

Does she sleep while in flight?

There is not a lot known about sleep in birds during migration, and especially for herons.  There is a chance she goes into slow-wave sleep, or SWS, during migration.  The following excerpt from an article in The Science of Nature explains SWS better than I can:

“As in mammals, birds exhibit two types of sleep, slow-wave sleep (SWS) and rapid eye-movement (REM) sleep. Whereas, SWS can occur in one or both brain hemispheres at a time, REM sleep only occurs bihemispherically. During unihemispheric SWS, the eye connected to the awake hemisphere remains open, a state that may allow birds to visually navigate during sleep in flight. Bihemispheric SWS may also be possible during flight when constant visual monitoring of the environment is unnecessary. Nevertheless, the reduction in muscle tone that usually accompanies REM sleep makes it unlikely that birds enter this state in flight.”

How can we track Harper’s movements?

Harper’s transmitter downloads data daily to an open-source website called Movebank.  There are instructions for the public to access the information on Movebank, and for downloading it into GoogleEarth, ArcGIS, and Microsoft Excel for viewing and analysis.  We encourage the use of the data for to answer questions about movements during nesting, habitat use, migration routes, wintering locations, and much more!

Do you have more questions?

Last year’s article has the answers to the following questions and more:

If you still have burning questions or curiosities, don’t hesitate to message me on Facebook or email me.

This work is supported by volunteers, the federal Pittman-Robertson program, the Maine Outdoor Heritage Fund, and the Maine Birder Band Fund.