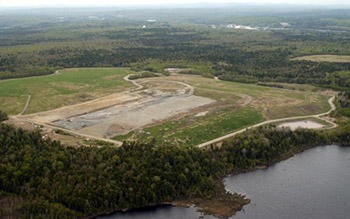 Dolby Landfill consists of three landfill sites (Dolby I, Dolby II, and Dolby III), which are located on the east side of Route 157, approximately 2-1/2 miles northwest of East Millinocket, Maine. The Dolby I Landfill received a license from the MEDEP in 1975 and occupies about 23 acres southwest of Dolby II and III. The principal waste streams at Dolby I were wastewater sludges, woodroom/woodyard waste, wood ash, and general rubbish from the Millinocket and East Millinocket mills, which were received from 1975 to 1979. Final cover was placed over Dolby I in 1980-1981.

Construction of Dolby III commenced in 1984. Dolby III occupies about 73 acres and has been operated in stages. The Landfill design consists of 17 waste cells; currently, Landfill operations are in Cells 15 and 16. Cells 1 through 14 have been filled to capacity and have received final cover. Cell 17 remains to be opened. The original waste streams at Dolby III were wastewater sludges, woodroom/ woodyard waste, wood ash, general rubbish from the Millinocket and East Millinocket mills and MSW from the local communities. The disposal of MSW was discontinued in 1993 due to a change in the solid waste regulations.