We will be operating under new regulations when the ice fishing season opens on January 1st, 2021 on Moosehead Lake. Recently, the brook trout population in Maine’s largest lake has seen significant improvement with many fish in the three to six-pound range caught both summer and winter.  It’s truly been an incredible few years.  I don’t think anyone can remember a time when we have seen this many quality/trophy wild brook trout come from one lake in Maine. Most of these monster trout are spawning late in the fall into early in the winter in concentrated areas of the lake and are extremely vulnerable to fishing. It’s worthy of special attention and the new regulations are designed to protect and prolong this outstanding fishery.

The regulations proposals were passed this fall after considerable data analysis, internal review, and public input. It’s a long process that began last winter, but it ensures regulations are appropriate and supported. We worked with a local stakeholder’s group, the Moosehead Lake Focus Group, early in the process to get their thoughts on this noteworthy fishery. The regulation proposals passed through several internal reviews including a detailed justification and review of all the available alternatives. We made a number of press releases to let the public know about the possible regulation changes and the rationale behind them. Finally, the proposals went out to the public for comment. It was very encouraging to see the comments. It was clear the public understood exactly what was at stake and they shared the same concerns and desires to protect the fishery as the staff. The response from the public was overwhelmingly supportive. The Department is grateful to all those that participated.

So, let’s get to the specifics so there is no confusion, and everyone knows what to expect as we wait for the first ice to take hold:

The rest of the Moosehead Lake fishing regulations remain the same as in 2020 and can be viewed in the 2021 fishing law book (PDF).

Fisheries and Warden Service personnel installed the red posts this fall to delineate the closed area. The red posts are red 2×8 boards attached to trees at the following coordinates:

Here is a map of the closed area in the Lily Bay Narrows: 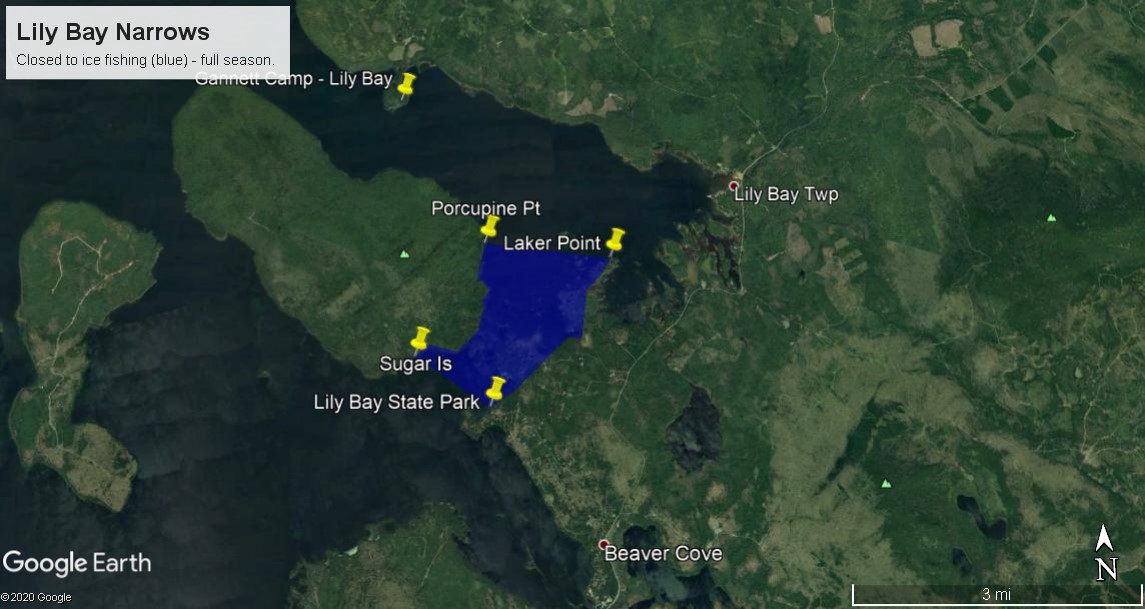 Anglers will likely catch these big trout all over the lake and we anticipate another good year in 2021. We had a terrific fall and documented that there are still good numbers of these shore spawning brook trout cruising around the lake. I’ll write more about that in future fishing blogs, including some excellent underwater drone footage.  Please handle and release those slot fish (18-22 inches) carefully. Success of the new regulations is literally in your hands. The future for wild brook trout is very promising for Moosehead Lake.