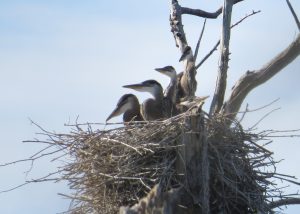 In what felt like a blink of an eye, we finished up our tenth year of monitoring great blue heron colonies with the help of Heron Observation Network volunteers.  These citizen scientists often braved mosquitoes and black flies and hiked through thick swampy forests to get a good view of great blue heron nests, which were often in snags in the middle of a wetland, sometimes in what felt like the middle of nowhere. Their blood (an offering to the biting insects), sweat, and tears (of joy, no doubt) have resulted in an invaluable amount of information regarding our nesting population – how many and where they are in Maine.  Over the past ten years, we have learned about 216 new colony locations – some are historic, but more than half remain active since initially reported. In 2018, 52 volunteers and seven MDIFW staff monitored 90 colonies across Maine, and conducted 167 site visits, including five done by aerial survey.  They observed 409 nesting pairs at 52 colonies, and 38 inactive colonies.  If we look at all 380 historic and active colonies in Maine and use the most recent data collected for each, our estimate for this year’s nesting activity is 767 pairs at 82 colonies, the lowest we have seen yet.  The drop in numbers in 2018 is within our inland colonies, whereas our coastal island colonies remained at an estimated 211 pairs on seven islands.  Year to year fluctuations are to be expected as birds shift colonies.  It will be interesting to see what our next dual-frame aerial survey (tentatively planned for 2020) estimates for nesting pairs across the state. 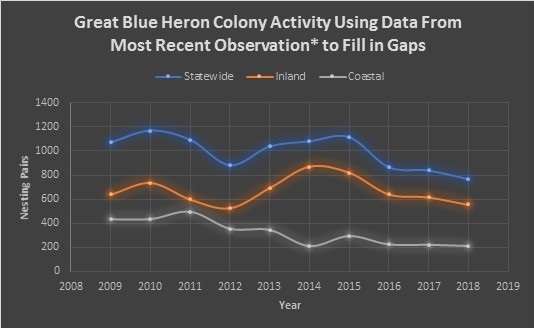 While we greatly appreciate the data collected by volunteers, their time spent doing so is also quite valuable to MDIFW as a non-federal match source.  This year they spent 2301 hrs and traveled 3,594 miles monitoring heron colonies, generating $6,348 in match!  This source of match enables us to conduct additional surveys, monitoring, and research regarding herons in Maine. With over 300 people now on the HERON email list, and over 1,300 followers on Facebook, we’ve generated quite an interest in and appreciation of herons among Mainers.  Through the Heron Tracking Project, we have engaged students in first grade to college level, and from York to Easton, in learning about herons, their habits, and their habitats. To celebrate this 10-year milestone, we will hold a workshop for HERON volunteers on Sunday, April 28th (time and location TBA).  First and foremost, it is a chance to thank volunteers in person for their service.  In addition, attendees will see a presentation about HERON – how it works, what we’ve learned, and future plans; a training session on viewing and entering data into the new Citizen Science Portal; and a chance to mingle with fellow volunteers over light refreshments.  There may even be a few awards given out!