As a biologist, I know death is as much a part of the life cycle of all organisms as life itself, but it can still be difficult to contend with especially after you’ve “gotten to know” an individual animal by following its movements for nearly five years.  That individual is Nokomis, a great blue heron we tagged with a GPS transmitter in 2016.  Nokomis’ transmitter last conveyed location information on January 12th, from what looks like a small village east of her winter foraging grounds in Haiti.  We saw some movement to and from the village in early January and hoped that her movements would normalize again so we waited to see what would happen.  We also checked her accelerometer data to see if we could detect a mortality event, but the last data received were from December 24th and it all looked normal.  With no further locations and no additional accelerometer data, we do not know exactly what happened to her but assume she died, or her transmitter failed or fell off.

Nokomis was first tagged with a GPS transmitter by MDIFW with the help of students and teachers from Nokomis Regional High School in Newport in June 2016.  Soon after her release, we learned she nested at the colony on school property, which further facilitated the students’ connection to her and her colony for the next five years.

Over the past four years and seven months, we have learned a lot from Nokomis.  Some behaviors may have been unique to her, but many are typical of many, if not most, great blue herons. She first surprised us by disappearing from the map for several weeks in fall of 2016, then suddenly showing up in Haiti.  We didn’t know where our herons winter, and certainly didn’t expect it to be as far south as Haiti.  Initially we thought a hurricane may have blown her off course that first year we followed her movements and thus she probably ended up in Haiti accidentally.  However, she returned to that same area in Haiti the following four winters, proving our initial theory wrong. This story was even mentioned in Down East magazine!

Her nesting colony is in an upland stand of white pines behind a school ballfield.  The majority of nesting colonies in Maine are in wetlands with the nests in dead trees surrounded by water.  The proximity to the school facilitated many student “field trips” to the colony in the off-season to locate nests and characterize the nest trees.  This past year, the colony was also a focal point of a virtual map of trails on school grounds [check out the interactive website here.]

A Creature of Habit

She had some favorite foraging areas in Maine, many of which were not very accessible – believe me, I tried getting to a few areas to get a data download from her transmitter when it wasn’t able to transfer data remotely.

She showed high fidelity to her nesting colony and wintering area, always returning to both each year.

She showed some predictability in the timing and length of her migration, especially in the spring:

Her 2020 fall migration showed a path traversing the Atlantic Ocean directly to Haiti without following the eastern coastline.  We have seen impressive trans-oceanic flights from a couple other tagged herons.

Nokomis winters in a very remote agricultural area of Haiti that looks to be rice fields.  She is an example of the many waterbirds who use rice fields during a large portion of her annual life cycle (~5 months each year).  Worldwide, rice fields are an important foraging habitat for many waterbird species during nesting, migration, and wintering.

Nokomis inspired a teacher in Port au Prince, Haiti, to write a poem about her and to discover birding as a favorite pastime!

We – numerous biologists, citizen scientists, and students of all ages – followed Nokomis for four years and seven months; in that time, she traveled approximately 30,000 miles and her GPS transmitter logged 143,916 locations.  While she herself may be gone, the data she provided will continue to shed light on heron habits, their habitats, and the connectivity of landscapes near and far. 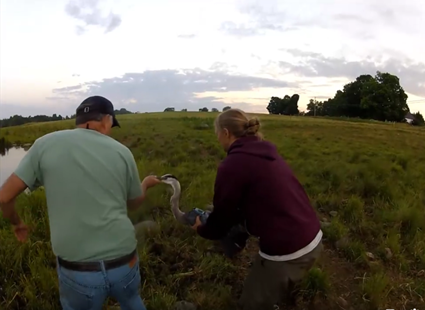 Explore her movements on Movebank: 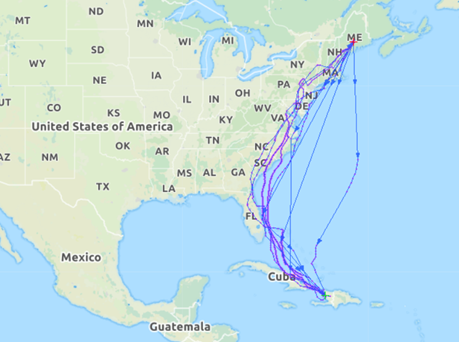