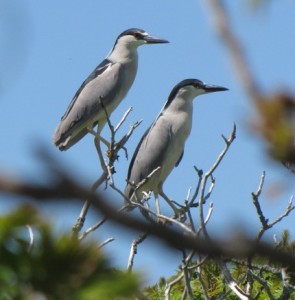 Adults perched during a ground survey. Photo by Brad Allen.[/caption] Great blue herons have been a huge focus of the Heron Observation Network’s survey efforts and blog posts, but let’s not forget the other colonial wading bird species that nest in Maine in the spring and summer months: night-herons, ibis, and egrets (oh my!). This fall and winter, I plan to share some information on these other members of the family Ardeidae. They have many characteristics in common with great blue herons, but each species is also unique and deserves the limelight once in a while. Let’s start with the black-crowned night-heron whose scientific name, Nycticorax nycticorax, translates to “night raven” and is appropriate considering its nocturnal habits and its crow-like call. All herons have the ability to feed both day and night due to a high percentage of rod-type photoreceptors in their eyes that improve their night vision, but night-herons primarily feed at night except when they are caring for their young who require feedings throughout the day as well. Compared to great blue herons, black-crowned night-herons are considerably smaller and stockier with shorter legs and neck. Adults are identified by their black crown, bill, and upper back; gray wings and tail; white underparts; white plumes coming off the back of the head; and red eyes. At the height of the breeding season, their legs turn from yellow to pink and the lore (area in front of eye) darkens to black. Many others in the heron family also have bare parts that change color as part of courtship. Also similar to other herons, they do neck displays as part of courtship, during which they erect their white head plumes which are up to 10 inches long. Juveniles are brown with light spots on their back and streaking on the front. They are often confused with juvenile yellow-crowned night-herons, which generally wander into Maine in late summer and early fall. [caption id="attachment_1286" align="alignleft" width="300"] 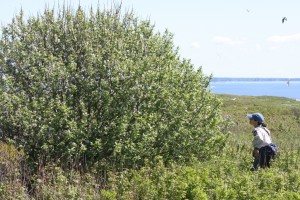 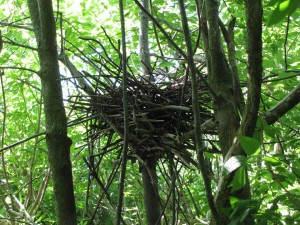 Their stick platform nests are often sparsely lined with grasses, and may be as close as 3 ft from one another.[/caption] Due to their secretive and nocturnal nature and their tendency to nest beneath the tree and shrub canopy, night-heron nests are difficult to find. Aerial surveys are not very effective because foliage obscures their stick nests which are half the size of great blue heron nests. Ground counts are effective when you know where to look, but they also can be disturbing to the birds and need to be timed just right to avoid causing abandonment prior to hatch or premature fledging. Black-crowned night-herons will forage up to 15 miles from their colonies; therefore, the sighting of a foraging adult does not give a clear indication of where it may be nesting. Nesting habitat is quite variable ranging from the ground to shrubs to 160 feet up in conifers and hardwoods. All of our currently active colonies are on coastal islands in primarily deciduous shrubs, but historically they also nested on the mainland. Thankfully black-crowned night-herons tend to nest in mixed-species colonies with other wading birds, such as egrets and ibises. The presence of these species nesting warrants a closer look for nesting black-crowned’s. [caption id="attachment_1287" align="alignright" width="300"] 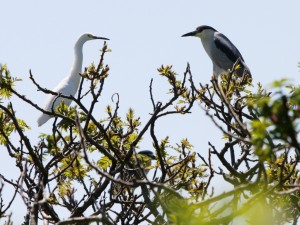 Black-crowned night-herons often nest in mixed-species colonies with snowy egrets (pictured here on left), great egrets, little blue herons, and glossy ibis. Photo by Brad Allen.[/caption] Another way to potentially locate a colony is to pay close attention to the flight direction of a foraging bird – both to and away from the foraging site. Colonial wading birds generally fly in a straight line from their nest to their favorite foraging location. Once we figure out a flight pattern, we can then identify suitable nesting habitat and investigate further. I hope I have sparked your interest in one of Maine’s rarest colonial wading birds. To learn more, visit Cornell Lab of Ornithology. In the meantime, here are a few more factoids to consider: [caption id="attachment_1288" align="aligncenter" width="300"] 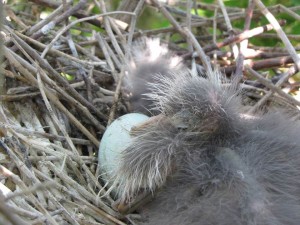 Black-crowned night-herons lay 3-5 greenish blue eggs, and incubate 23-26 days. The eggs hatch asynchronously, which creates a perfect situation for one chick to be outcompeted.[/caption]
Categories