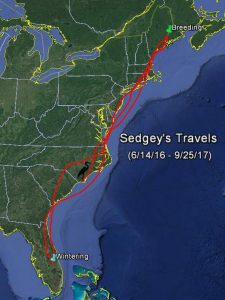 Sedgey travelled over 7,000 miles in a year and a half. He nested in central Maine and wintered in central Florida. He died in North Carolina on September 25, 2017.

For those of you who have followed Sedgey’s travels over the last year and a half, he died on September 25th in North Carolina. Our research partner, John Brzorad from 1000 Herons, was able to locate and collect his remains to be examined by me and a few other biologists and veterinarians to determine the cause of death. The average lifespan of a great blue heron is 15 years. We don’t know how old Sedgey was, but we do know he had two successful nesting seasons while we were tracking his movements with his solar-powered GPS transmitter, and he likely fledged at least two young last year and four young this year. On average, great blue herons lay 2-6 eggs and fledge 2-3 young each breeding season. Great blue herons have a 21% chance of surviving their first year. Once they reach adulthood (3 years and older), their chance of surviving each year is about 78%. 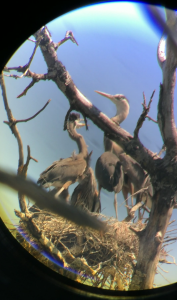 Sedgey at his nest with his four young in July 2017.

With wintering areas in Florida, the Bahamas, Cuba, and Haiti, Maine’s great blue herons are long-distance migrants compared to those living in milder climates who tend to be residents or perform short-distance migrations. Sedgey wintered in Florida last year. This year, he left Maine on August 30th, and he migrated as far as the southern coast of North Carolina. We suspect he stopped in NC rather than continuing to where he wintered last year due to the weather from Hurricane Irma. We were curious to see if he would remain in NC until spring or continue south after hurricane season was over. 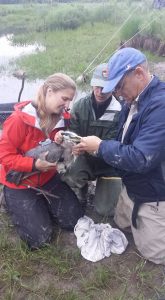 We have learned a lot from Sedgey. Out of all of our tagged herons, he was the earliest to begin his fall migration, and he also took the least amount of time to complete his migration (both fall and spring). He surprised us by nesting in a different colony the second year we were tracking him. In just one year and a half, he travelled over 7,000 miles! We will continue to learn from Sedgey as we further analyze his movement data, especially compared to the other GPS-tagged herons. We have his transmitter and hope to place it on another great blue heron next spring. Video: Sedgey Feeding His Young Video: Sedgey's Favorite Post-Breeding Foraging Spot