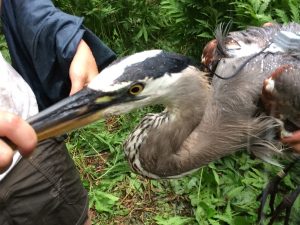 Snark, just before release with his new transmitter harness (it was pouring, so he’s a bit wet and disheveled). Photo by Chip McKnight.

Have you heard about “Snark,” the first great blue heron in Maine to be outfitted with a GPS transmitter last spring, and the only one to be recaptured a year later?  The great blue heron is a Species of Special Concern in Maine due to a decline along the coast. By tracking the movement of individuals, we can learn more about their habitat requirements and needs, along with when and where they go in the winter. Snark is an adult male tagged last spring on Sedgeunkedunk Stream in Orrington.  He was named by the students at Haworth Academic Center in Bangor, who helped biologists attract him to a trapping location.  At the time they chose his name, they were reading the Lewis Carroll poem, “Hunting of the Snark." Snark’s name has certainly turned out to be quite fitting because he has been “hunted,”or rather pursued, by biologists on three occasions now. The first time was during his initial capture in June 2016 when biologists successfully captured and equipped him with a GPS transmitter. The second time was on his wintering grounds in Vero Beach, FL, after biologists witnessed a ribbon hanging down from his backpack, indicating it needed repair.  After three days of nonstop pursuit with ballyhoo (a baitfish native to Florida) and a ghillie suit (for camouflage), Snark was momentarily captured but shook the trap off his foot. 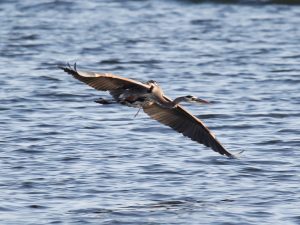 Snark, photographed in Vero Beach, Florida, with a ribbon dangling from his transmitter's harness. . Photo by Doug and Paula Albert.

Despite his dangling ribbon, he thrived in Florida, migrated back to Maine in April, and nested at the same colony as he did last year.  For the past two months, IFW biologists pursued him for a third time, honing in on his favorite feeding locations, and paying close attention to every step he made via game cameras.  Just a few days ago, they successfully recaptured Snark, removed his old harness and replaced it with a new one.  We look forward to following his movements into the future. Throughout this project, we are actively engaging students in the field and in the classroom.  Maine’s tagged herons are connecting students of all ages to the natural world in a whole new way. Do you want to follow Snark and the other tagged herons online to see where they are nesting, feeding, and when and where they migrate?   It’s easy!  Just follow the instructions here.