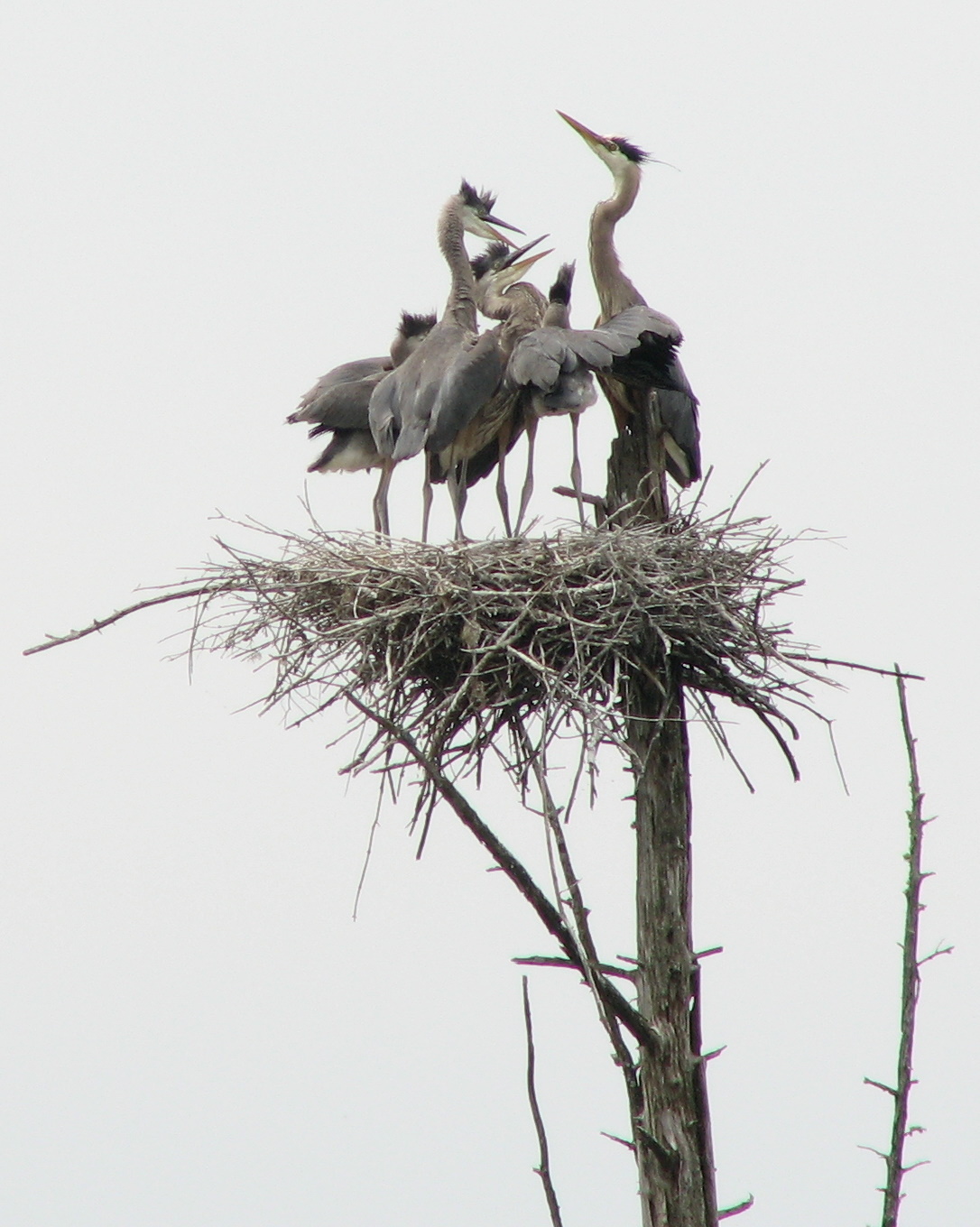 [/caption]  [The short article and incredible photos below are from volunteer, Ron Logan, who monitors 4 great blue heron colonies for HERON.]
The season will begin in a couple weeks to monitor my 4 Great Blue Heron colonies. These pictures are from last year and were taken from quite a distance. Generally you can't get very close to nests, since they are in wetlands and 20 to 50 feet in the air.  If you think feeding your babies was tough, or that dinner table fights with your siblings was a nightmare, imagine what it would be like as a Great Blue Heron. [caption id="attachment_614" align="alignleft" width="239" caption="A nestling pulls at the adult's beak as a signal to give up the food. Photo by Ron Logan"] 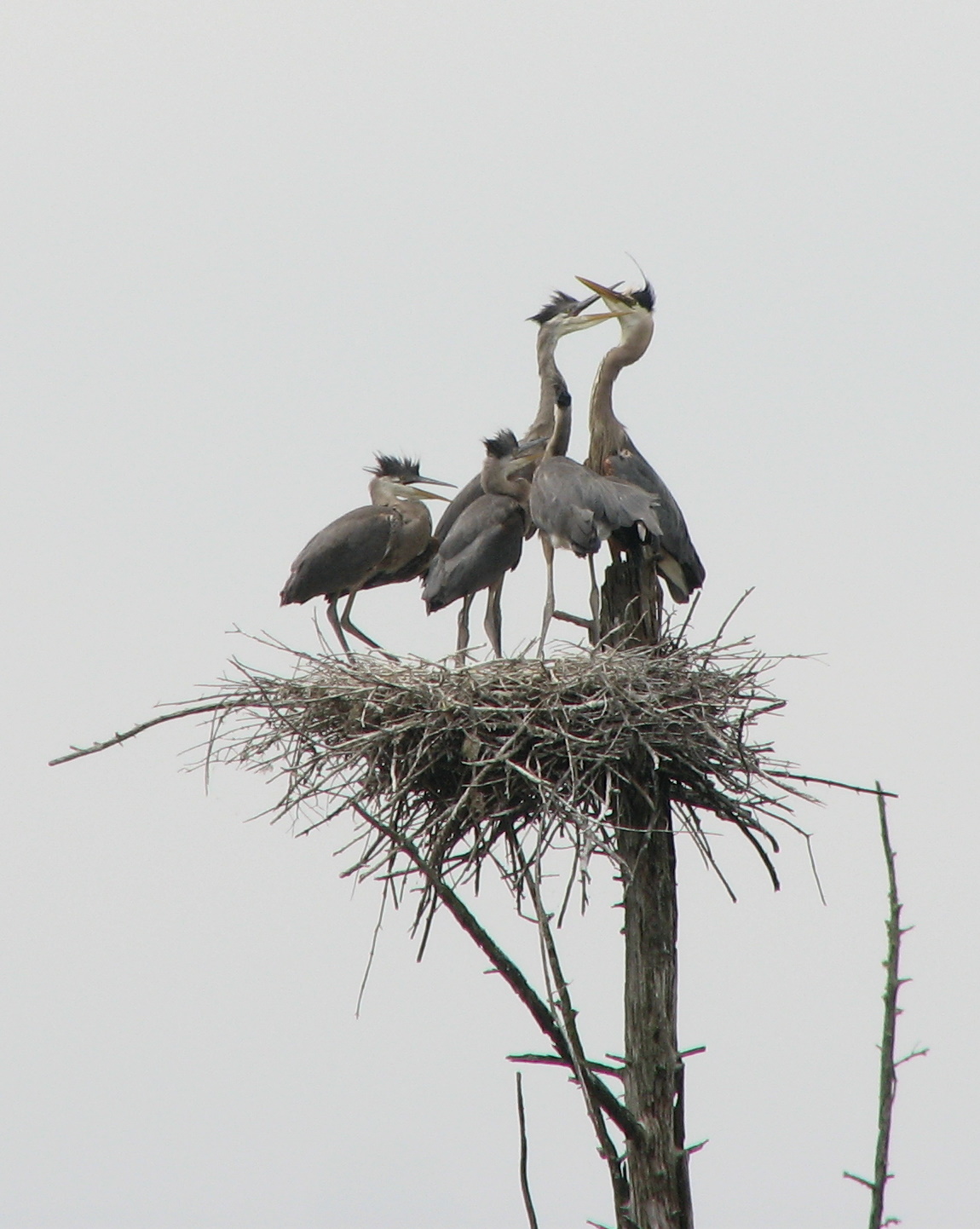 [/caption] This is how it works: First the mother arrives with the meal. She strikes a regal pose and the kids all gather in front her. [Note: Both males and females share feeding duties.] At some point one of the kids (wise guy, class clown, etc.) reaches up and grabs mom's beak and pulls her down into the pack, which then resembles a rugby match. [Note: When a nestling grabs the adult's bill, it stimulates the adult to regurgitate its food for its young.] [caption id="attachment_592" align="alignleft" width="239" caption="The adult bends down to give up the food and the nestlings try to get their share. Photo by Ron Logan"] 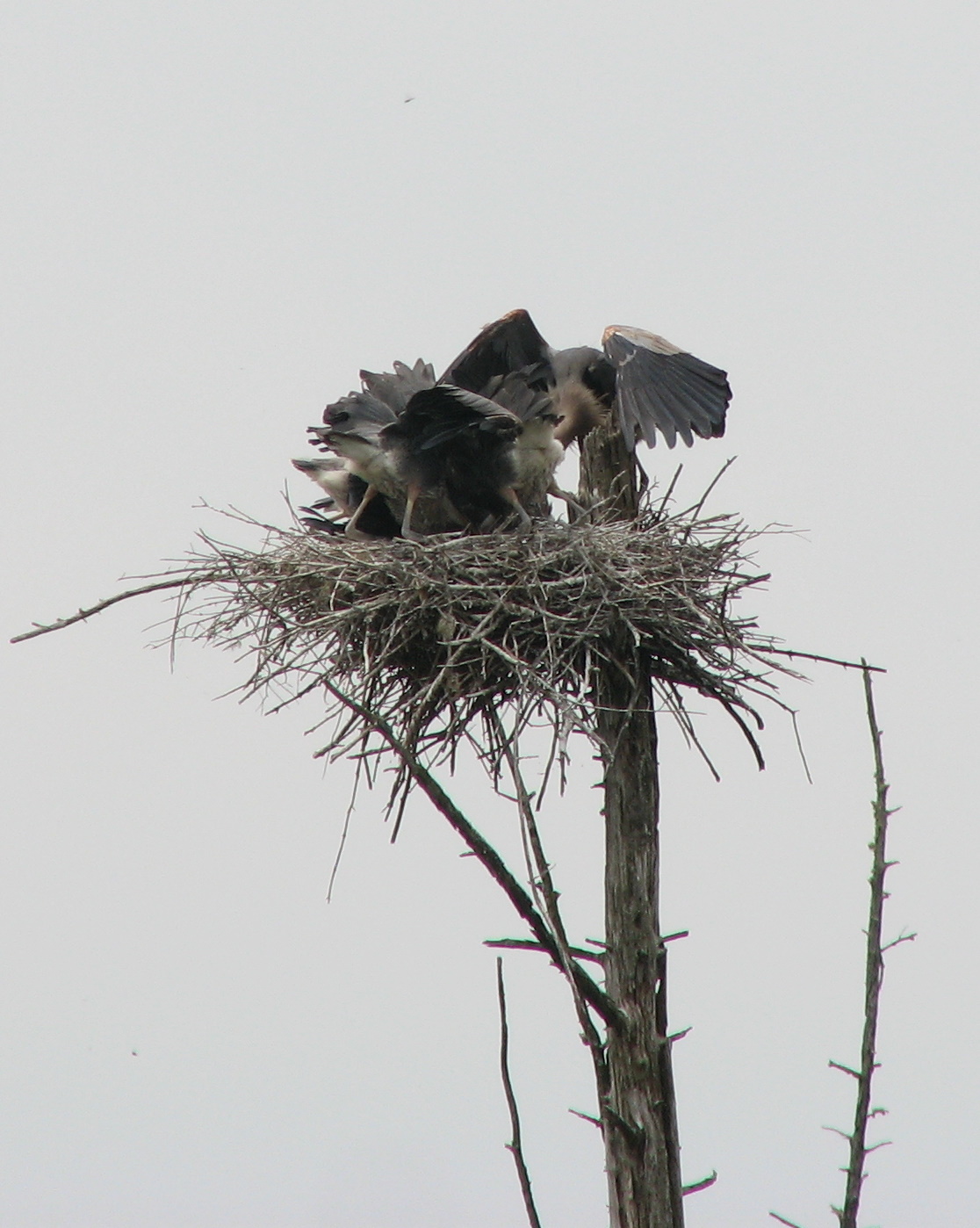 [/caption] You're seeing it once, but it plays out over and over. Each time the mother stands erect, and then gets pulled down into the rugby scrum. [caption id="attachment_597" align="alignleft" width="239" caption="The adult stands by as the nestlings feed. Photo by Ron Logan"] 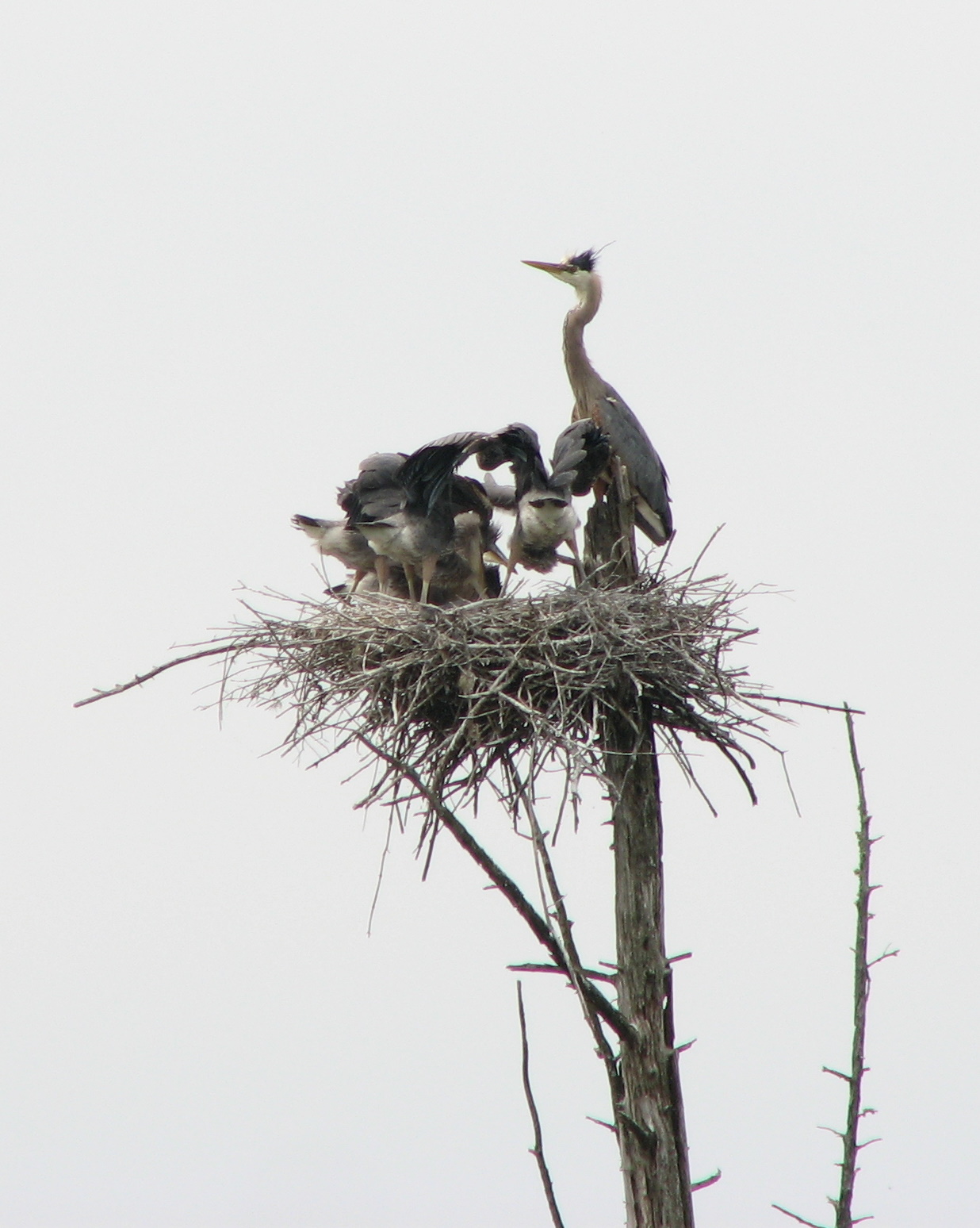 [/caption]   It's a wonder that all the kids get fed. Inevitably fights break out. [Note: Whether or not the herons view it as a fight, it is instinctive for them to get fed as much food as possible.] In this case, the bird about to fall over backwards, down 50' into the swamp (remember, he can't fly yet), regained his balance and lived to enjoy other food fights. I've been told, in the south alligators gather under the nests, waiting for the occasional feast from above. [Note: It is not uncommon for nestlings to fall out of nests as a result of losing their balance, getting pushed by nest-mates, getting blown out by a strong wind, or by being frightened by a potential predator. These nestlings most often do not survive the fall.]  The mother remains regal and detached as this drama plays out. I'm guessing she can't count anyway. [Note: Great blue herons hatch asynchronously, meaning that each egg hatches 1-2 days apart.  Thus, the first hatched nestling has an automatic advantage over younger siblings, especially when it comes to winning food fights as described above.  At 4 weeks of age, herons can lift and swallow whole fish dropped by the parents into the nest.  Large fish often result in tug-of-war episodes among sibling herons, with not all coming out as winners.  If the youngest chicks cannot compete well with their siblings for food, they may stop growing and eventually perish.] [HERON volunteers often witness interesting events when watching their adopted colonies.  I hope to share similar articles and photos provided by vounteers in the future; all will be categorized as "Volunteer View".] [caption id="attachment_656" align="alignleft" width="239" caption="A nestling regains its balance at the edge of the nest. Photo by Ron Logan."] 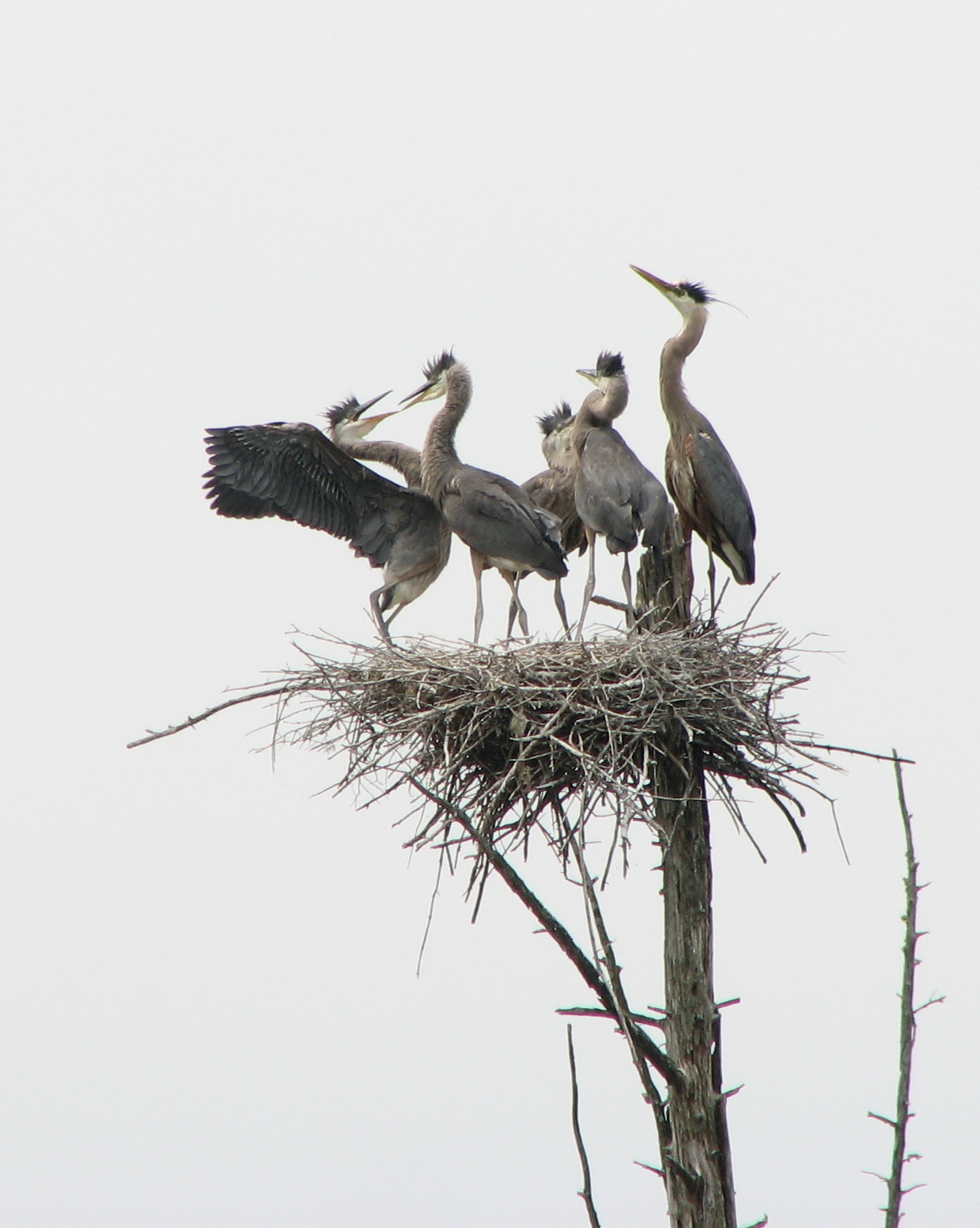