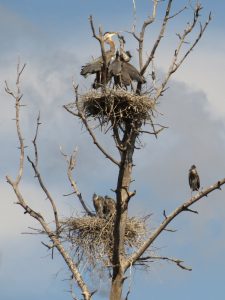 Volunteers are Vital From Eagle Lake to Milbridge to Eliot, the Heron Observation Network of Maine completed its ninth year of monitoring great blue heron colonies in an ongoing effort to better understand the status of the population.  Great blue herons are widespread throughout Maine; however, a noticeable decline in their coastal nesting population has occurred since the 1980s.  By enlisting volunteers to help keep tabs on colonies, we can cover on average over three times as many sites as if MDIFW staff and contractors were to do it alone. In total, staff, contractors, and volunteers surveyed 139 colonies in 2017. With over 184 ground visits, 61 volunteers monitored nesting activity at 92 colonies.  Staff and contractors monitored an additional 47 colonies through aerial surveys and ground visits. Besides increasing the number of colonies surveyed, volunteers who 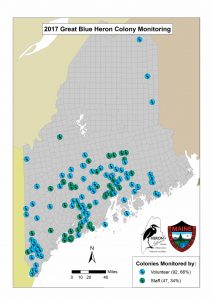 Over 66% of colonies surveyed in 2017 were covered by HERON Volunteers.

document their time and mileage during their survey efforts are contributing an enormous amount of matching funds.  Each hour is worth about $20 and each mile is worth about $0.57.  This adds up quickly.  Only 23 volunteers properly documented their time and mileage this year; however, their 397 hours and 3,563 miles equate to over $10,000 in match that can be used to leverage up to twice that amount in federal funds.  This will help fund additional survey and research efforts in the coming years. Coast Continues to Drop; Inland Increases Slightly All the effort by volunteers, staff and contractors revealed similar results as in 2016.  In 2017, we observed 60 active colonies with 629 nesting pairs.  Since not all known colonies were surveyed, we typically assume that the latest survey data for those still stand, providing a more probable total of 838 nesting pairs among 81 active colonies statewide. The number of nesting pairs on our coastal islands is at its lowest level yet since the 1980s.  With only 221 nesting pairs among seven islands, the coastal population is now down 82% since 1983.  Since 2013, the 5-year average has been decreasing 8-16% each year.  The inland population looks relatively stable, with small ups and downs since we began close monitoring in 2009.  The average number of inland nesting pairs over the past nine years is 683.  Since 2013, the 5-year average has been increasing by 1-2% each year. 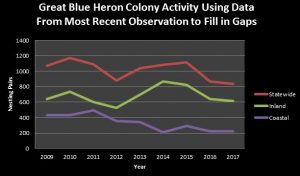 Nesting pairs on our coastal island colonies continues to decline; whereas nesting pairs at inland colonies is relatively stable with small ups and downs since we began close monitoring in 2009.

The inland increases don’t make up for the losses on the coast, however there may be a lag time between the initiation of new colonies and when they become discovered by you and me.  We discovered eight new colonies in 2017.  Two of those colonies are within six miles of the large colony on Wreck Island (Muscongus Bay) that we lost in 2016.  While these two colonies only contain 40 nesting pairs combined, they could represent some of the pairs from Wreck Island. Now, if we could just find the other 60-80 pairs who abandoned that colony! Coastal islands may no longer be preferred habitat for nesting great blue herons in Maine; however, the reasons for this change are not entirely clear.  Disturbance, predators, and change in prey abundance could all be part of the equation.  We hope that continued monitoring efforts will shed more light on this piece. 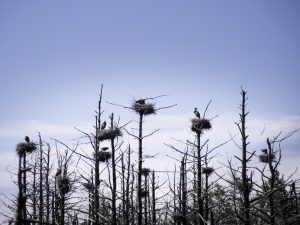 Looking Ahead This spring will be the tenth anniversary of the Heron Observation Network of Maine.  While we have gained invaluable information regarding the abundance and distribution of nesting great blue herons throughout the state of Maine, our work is not yet done.  In 2020, we hope to repeat the Dual-Frame Aerial Survey conducted in 2015 to arrive at an updated population estimate, which in turn will give us trend information.  In order for that survey to be a success, we will need to continue to collect data on as many colonies as possible between now and then.  Thus, volunteers are still essential! Reports of colonies are also essential.  As colonies shift around the landscape, we need help discovering the new locations.  If you know of a great blue heron colony, please don’t hesitate to report it to MDIFW.  There is no harm in reporting a colony we already know about.  In addition, we need more volunteers to help cover as many colonies as possible.  Contact MDIFW if you are interested in joining the Heron Observation Network and monitoring a colony.