Forestry and Herons Can and Do Mix

The following article was originally written for the October 2012 issue of "SWOAM News", the newsletter of the Small Woodland Owners Association of Maine:  [caption id="attachment_978" align="alignleft" width="300"] 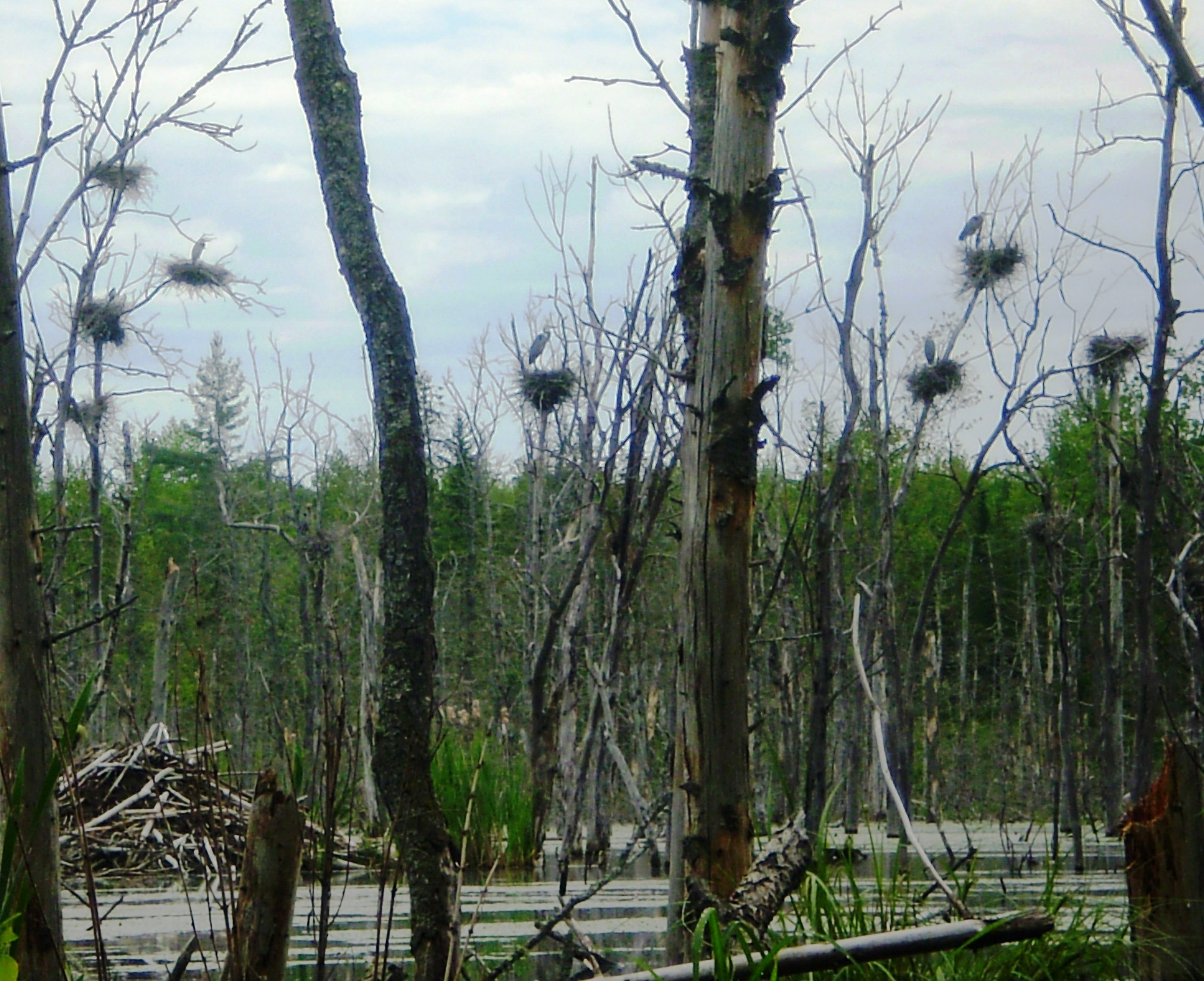 Great blue heron nests are often found in snags located in beaver flowages. Photo by Michael Merchant.[/caption] Mention the great blue heron and most envision a large bird with long legs and neck knee-deep in water slowly stalking its prey. These wetland icons also rely on trees, both live and dead, for nesting. These magnificent birds build large platform stick nests 8-100 ft up in trees and nest in groups, or colonies. In Maine, colonies occur on coastal and freshwater islands, in beaver flowages, and in upland settings. Their nests are built in mature hardwoods and softwoods and can be in live, dead, or dying trees. Chances are, your property is potential nesting habitat for these prehistoric looking and sounding birds. Great blue heron colonies may contain a few pairs to over a hundred, often with multiple nests occupying the same tree. Colony habitat preference is not completely understood, but they are most often located within 2.5 miles of several important feeding wetlands; in areas with few roads and little human disturbance; and within large contiguous forest stands. Nesting in colonies helps in terms of predator avoidance, but also makes them vulnerable to habitat loss. Impacts to the colony and even brief disturbance events near the colony can affect dozens of breeding pairs. Maine’s great blue herons migrate south in winter to find ice-free feeding areas. As early as mid-March they begin to return to the state, and by mid-April many are setting up nests at colonies. Individuals tend to return to the same colony location each year. In Maine, some colonies have persisted for several decades. [caption id="attachment_979" align="alignleft" width="225"] 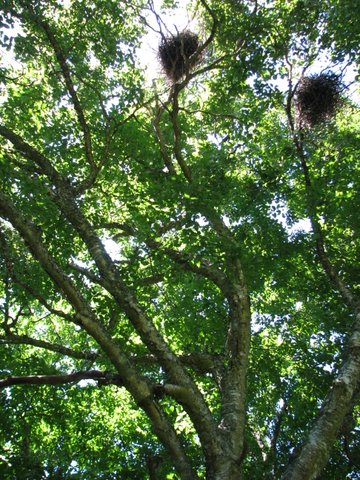 Herons can also use trees with full canopies. Photo by Doug McMullin, Maine Coast heritage Trust.[/caption] During the nesting season (1 Apr – 15 Aug), the birds are extremely sensitive to disturbances caused by human intrusion, noise, and predators, and may even abandon a colony as a result. Their sensitivity varies in relation to the stage of breeding; the intensity, duration, and proximity of a new activity; woodland buffers or topography; and pre-existing uses on adjacent lands. The most sensitive times tend to be just before incubation (early May) and after the young are 4-6 weeks old (late June) and nearing fledging (late July). The Maine Department of Inland Fisheries and Wildlife has developed preliminary guidelines to help protect and conserve great blue heron colonies. The main element of these guidelines is to minimize disturbance to the birds during the nesting season. To ensure this, we recommend a primary nesting buffer of approximately 660 ft around great blue heron nests, in which all human activity is avoided during the nesting period. Within approximately a quarter mile from all nests, it is also best to avoid major alterations to the landscape, such as land clearing, new road construction, and permanent structures. Forest management can be a compatible land use for great blue herons. Timing considerations are critical; and fall or winter tree harvesting is preferred. To ensure minimal impacts, harvest prescriptions are best planned on site with a wildlife biologist. Management practices that maintain or improve the integrity of the overstory and provide for a continuing supply of mature trees favored for nesting are often rewarded with continued colony occupancy. Great blue herons also nest in snags in wetlands; in fact most of Maine’s inland colonies occur in beaver flowages. A final consideration for conservation of great blue heron colonies is the protection of wetlands – both for nesting and foraging. Beaver flowages need beavers to maintain them; allow beavers to persist in these areas to some extent in order to create a stable water level regime. Landowners can protect wetlands and streams and shorelines of lakes and ponds by maintaining a minimum 75 ft no-cut zone, and adopting land use practices that protect water quality, limit erosion, and conserve native wildlife and vegetation. If you find a great blue heron nest, please contact MDIFW at (207) 941-4466. Since 2009, we have tracked great blue heron colonies to better understand their statewide population status.
Categories