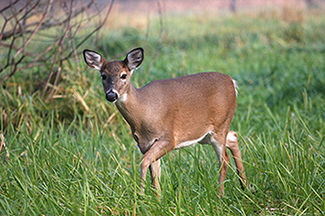 What is Chronic Wasting Disease?

Chronic wasting disease (CWD) is a fatal nervous system disease that impacts cervid (deer family) mammals. In deer, it has a 100% mortality rate.

The prevailing theory is that an infectious protein called a CWD prion causes other brain proteins to change to a diseased form. CWD prions then accumulate in the brain and other nervous tissues, where they physically damage nerve cells. The disease agent mainly targets nervous tissue, but it has been found in other tissues including muscles.

Which species can contract CWD?

CWD has been found in wild and captive elk, moose, and caribou as well as white-tailed, mule, red, and sika deer. We don’t know if other cervid species are susceptible, and there is no scientific evidence that CWD can be transmitted to species outside the deer family, such as cattle, horses, sheep, goats, or swine. There is no evidence that CWD can infect humans, but public health officials still recommend avoiding exposure to it.

What are the signs and symptoms of CWD?

CWD symptoms are slow to develop, usually taking five to 36 months to appear; but after they do, the animal normally dies in one to 12 months. Symptoms include unusual or sluggish behavior, loss of bodily functions, weight loss, excessive drooling, excessive thirst, frequent urination, isolation from herd, teeth grinding, holding the head in a lowered position, and drooping ears.

Some of these symptoms, particularly weight loss and weakness, can also be seen after a very severe Maine winter. Rabies, although rare in cervids, may also produce some symptoms in common with CWD, such as erratic behavior and drooling.

How is CWD diagnosed?

Most of the deer sampled for CWD in Maine are tested using a more rapid and cost-effective method called enzyme-linked immunosorbant assay (ELISA), through which a color-changing test solution can indicate the presence of prions. Any samples identified with ELISA as having CWD prions would be verified using IHC.

Most CWD tests are conducted on dead animals. Live animals can be diagnosed for CWD by taking a biopsy sample from the animal's tonsils and analyzing it with IHC; but this is only done in certain cervid-management situations.

Is CWD present in Maine?

CWD has never been found in Maine. The nearest population with CWD is in Pennsylvania, though it was found in New York in 2005 (but not since). It has also been found in moose in Colorado and Wyoming.

How does CWD spread?

When deer have frequent, close contact with each other, such around feeding stations or in fenced enclosures, their risk of CWD transmission rises. Contact between wild and fenced cervids along fence lines can also spread CWD (in either direction).

Sites where CWD-infected cervids died (or were placed) may also become contaminated as tissues decompose. Predators and scavengers can also transmit and spread CWD prions around the environment after consuming infectious parts of CWD-infected cervids. CWD prions are not easily destroyed by environmental factors, heat, or disinfection solutions and can persist outside of a host for many years; and recent research has shown that plants can uptake the disease agent and become a potential disease vector.

Why are we concerned about CWD in Maine?

Where it occurs, CWD poses serious wildlife management problems. If it emerges in Maine, CWD could destabilize the state’s deer population by reducing adult survival rates (CWD infections are usually found in deer 18 months or older). Monitoring and control of an active CWD outbreak is extremely costly and would divert already-scarce funds and staff resources away from other much-needed programs.

Public perceptions about associated human health risks may erode hunter willingness to harvest deer, leading to unwanted population growth in areas that remain CWD-free. Major reductions in deer hunting – a $200 million+ industry for Maine – would adversely affect our rural state’s economy. Furthermore, concerns about the safety of farmed venison as human food could cause the collapse of Maine's $1 million deer farming industry. All of this makes CWD prevention an urgent State priority.

What are State agencies doing to prevent a CWD outbreak?

MDIFW, the Maine Department of Agriculture, Conservation, and Forestry (DACF), Maine Wildlife Services (WS), and other state departments all play a role in testing and monitoring Maine’s cervid populations for CWD.

DACF and MDIFW coordinate efforts to prevent CWD from entering the state, and they also work closely with other states, the federal government, and private organizations on various CWD-related topics. Their activities cover three key areas: prevention, monitoring, and outreach.

Preventing CWD introduction: The Maine Department of Agriculture revised its cervid importation rules in 2010, lifting an embargo that had been in place since 2002. Cervid importations are now permitted in conformance with the Department’s rules, which require that animals come from five-year CWD-certified herds as well as from accredited tuberculosis-free herds.

Monitoring wild and farmed deer: Efforts to monitor wild and captive/farmed deer for CWD are increasing nationwide, and Maine is no exception.

In the Wild, plans include testing a representative, statewide sample of the deer harvest for CWD each year for the foreseeable future.

In 1999, Maine agencies worked together to test 299 harvested white-tailed deer from Western Maine for CWD. All were negative.

In 2002, MDIFW began testing a sub-sample of each year’s deer and moose harvest. From the 6,000-8,000 harvested deer and 2,000-3,000 moose that MDIFW biologists examine each year for management purposes, we send ~500 samples to a lab for CWD testing. Thus far, all have been negative.

We also observe hundreds of live deer each year while conducting other field work and respond to hunters who report killing deer that appear to have been injured or ill. To date, we have not observed CWD symptoms in any of these animals.

On the Farm, captive/farmed deer are monitored for the presence of CWD using on-farm health monitoring practices and by testing certain farmed deer for CWD at slaughter.

The Department of Agriculture, Conservation, and Forestry (DACF) monitors the deer on Maine’s licensed deer farms for CWD. Since Autumn 2001, more than 1,900 farm-raised elk and deer have been tested for CWD and all tests have been negative.

Outreach: Good communication helps prevent disease. To that end, MDIFW has issued advisories to hunters, meat processors, taxidermists, deer farmers, and the public, sharing basic facts about CWD and how to lessen the risks of introducing it to Maine. These advisories cover:

How can the average person help prevent CWD?

What Can Hunters Do to Help?

Can I Get My Maine Deer, Caribou, Moose or Elk Tested for CWD?

Not on demand. Although our system can accommodate enough samples (less than 1,000) from farm-raised and wild deer to scientifically monitor for CWD, we are not able to routinely test hunter-killed deer, moose, caribou or elk in Maine at this time. This is largely due to the high demand for CWD testing in states known to harbor CWD. Existing CWD tests are expensive, time-consuming, and can only be performed at a few federally approved labs.

For info on regulation of captive or farmed deer or elk: