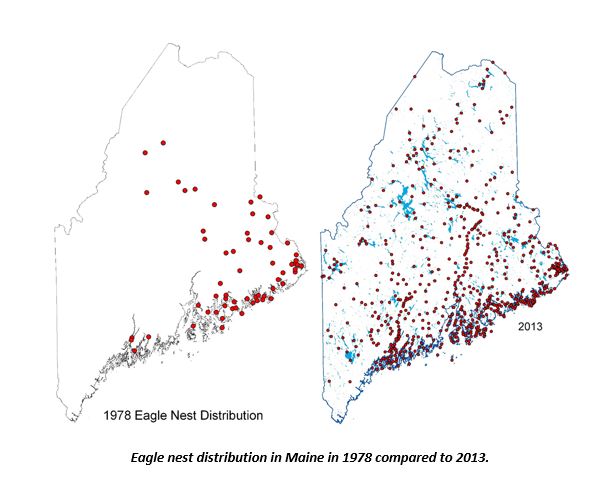 AUGUSTA, Maine -- Maine Department of Inland Fisheries and Wildlife biologists and Game Warden pilots are in the midst of the largest statewide survey of bald eagles since 2013.

Bald eagles were listed as endangered and nearly vanished from the state in the seventies when only 39 pairs remained when restoration efforts first started. Since then, the bald eagle is now the symbol of conservation success with over 634 nesting pairs of eagles counted in Maine in 2013.

Biologists began counting nesting eagle pairs from a plane this past March. Eagles were the focus of annual nesting surveys when listed as endangered, but since 2008 are monitored in five year checkups. Biologists hope to conclude aerial survey flights by the end of this month.

Eagles are loyal to nests. They relocate nearby only out of necessity. MDIFW is checking more than 1,800 sites over an eight-week period, checking nesting sites that were used as far back as the 1960s. Searches occur in other areas that offer potential eagle habitat not previously used by nesting eagles along lakes, rivers, and coastal waters.

Survey timing is staggered throughout the state to match periods in the breeding cycle when eagles are mostly at nests. Nesting dates can vary by six weeks among neighboring eagle pairs. The statewide range of egg-laying dates range from February 25 to May 7 statewide. An adult eagle must incubate its eggs nearly full time for a five-week period, and nestling eaglets remain in the nest for at least three months before they can fly.

Early surveys in March reflected the difficulty of nesting and maintaining nests during a Maine spring. Some eagles were incubating eggs while surrounded in snow, one nest was abandoned with an egg visible in the nest, and many nests were missing likely due to the March nor’easters Maine experienced this year.

Generations of bald eagles will use the same nesting territory sequentially over decades. In fact, the same nest is often reused if its ever enlarging size does not harm the tree. A Sagadahoc County nest found in 1963 measured 20 feet vertically; biologists conservatively estimated it had been in use for at least 60 years.

The findings of this study will also be used to re-evaluate the future needs for monitoring of Maine’s breeding eagle population or determine whether to modify the 5-year aerial survey census that has been ongoing since 2008.

Funds for this project come from the US Fish and Wildlife Service Wildlife Restoration Program, which are derived from an industry excise tax paid on hunting equipment. These funds support a wide variety of projects and programs including wildlife population management, research, surveys, habitat management, land acquisition, hunter safety programs, and construction and maintenance of shooting ranges.