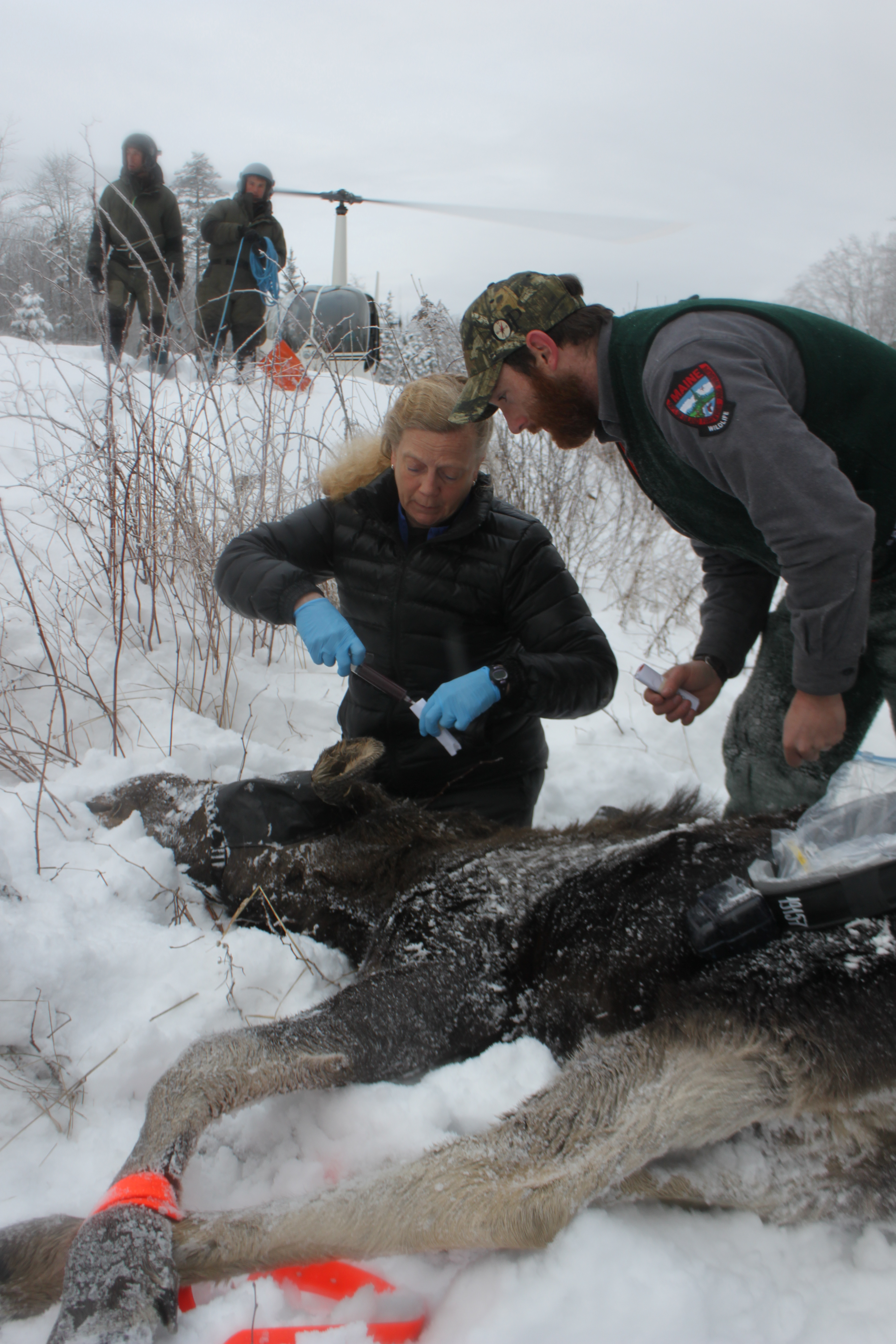 AUGUSTA, Maine – Department of Inland Fisheries and Wildlife biologists in northern Aroostook County just finished capturing and radio-collaring moose in a new “northern” study area as part of Maine’s five-year moose study that will provide a greater understanding of the health of Maine’s moose population, particularly factors that affect their survival and reproductive rates, including the impact of winter ticks on moose.

“Maine’s moose occupy a variety of habitat across their range in the state. By adding a second study area to the north we can bolster our study and get a better understanding of moose survival and reproductive rates, and the factors that impact them,” said Lee Kantar, Maine’s moose biologist.

IFW has contracted with Native Range Capture Services out of Elko, Nevada to capture 106 moose. The crew specializes in capturing and collaring large animals and is using a helicopter and launched nets to capture and collar female moose and calves. Funding for the study comes from a federal Pittman-Robertson grant (funded by the sale of hunting equipment) and the state’s dedicated moose fund (funded through sale of moose permit applications and permits).

“Once the moose is captured, the crew attaches a GPS collar and ear tags, collects a blood, hair and fecal sample, takes a tick count and weighs the animal,” said Lee Kantar, “The entire process takes between 10 and 12 minutes and then the moose is released unharmed.”

Crews started capturing and collaring moose last week and finished in the northern study area yesterday. They started flying in the western study area today. Once Native Range finishes in Maine, they will travel to a similar job in New Hampshire. New Hampshire is conducting a study similar to Maine, in an area further south than the two Maine study areas. The two states are sharing information gathered during the study.

Once collared, the GPS-enabled collars transmit twice per day, providing biologists the ability to track moose movements. The GPS collars are expected to transmit location signals for four years. If there is no movement for a certain period of time, the collar transmits a mortality signal, and biologists will then travel overland to investigate the cause of death.

“Once we receive a mortality signal, we locate the dead moose within 24 hours,” said Kantar. Biologists conduct an extensive field necropsy on each moose, taking blood, tissue and fecal samples that will later be analyzed by the University of Maine-Animal Health Lab as well as other specialized diagnostic facilities,.

This is the third year of the monitoring study. Additional moose and calves will be captured and collared next year.

The radio collar study is just one component of the research that IFW conducts on moose.