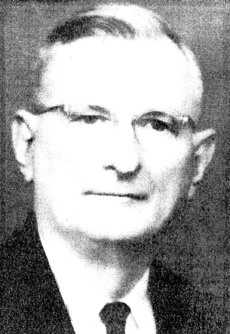 Thomas Morgan Griffiths was born in Braidwood, Illinois on April 6, 1888, the son of the Rev. Thomas Morgan Griffiths and Theodocia Williams Griffiths. He was educated in the schools of Dawn, Missouri and graduated from William Jewell College in Liberty, Missouri in 1912. He then earned master’s degrees from William Jewell College and Harvard University as well as a bachelor of divinity degree from Colgate Rochester Divinity School in Rochester, New York.

A professor of history at Colby College in Waterville from 1923 to 1945, Griffiths also served as minister of South China Community Church for twenty-seven years, retiring in 1962. During World War II, he organized history courses taught to Army Air Force cadets at Colby; and in 1945 he taught history to V-12 Navy trainees at Bates College in Lewiston. From Bates he became principal of Monmouth Academy, retiring in 1950.

Thomas M. Griffiths served on the Standing Committee of the Maine Historical Society. He was appointed as State Historian by Governor Lewis O. Barrows in 1939 and served until 1956. Griffiths died in Winthrop, Maine in May, 1987 at the age of 99.