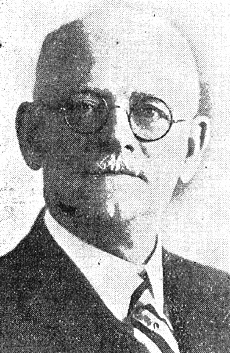 Edward Kalloch Gould was born in Rockland, Maine on September 28, 1865, the son of John L. Kalloch and Rosetta J. Gould as well as the adopted son of Stephen Gould. Edward Gould attended Rockland public schools and graduated from Rockland High School. After taking courses at Rockland Commercial College, he studied law for three years and was admitted to the Maine bar in 1888.

Edward Gould distinguished himself in public service at the local and county levels. Locally, he served as city solicitor for Rockland as well as a mayor and school board member. He won county elections for Registrar of Probate, Treasurer, and Judge of Probate.

Gould pursued a life-long interest in military affairs, publishing a guide book for the Sons of Union Veterans at the age of 22 in 1887. His father, who died when he was four, had been a member of the Fourth Maine Regiment during the Civil War. Gould was also fascinated by Maine history, researching, lecturing, and publishing on a variety of topics. He was a member of the Maine Historical Society and the president of the Maine Society of the Sons of the American Revolution. In 1933 Governor Louis J. Brann appointed him as State Historian, which he held until his death on November 13, 1939, at the age of 74.