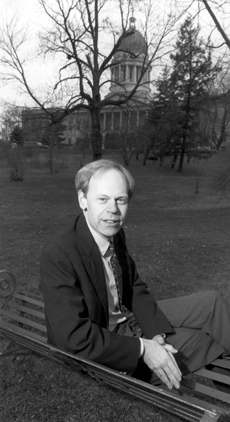 Earle Grey Shettleworth, Jr. was born in Portland, Maine on August 17, 1948, the son of Earle G. Shettleworth, Sr. and Esther Knudsen Shettleworth. He was educated in Portland public schools, graduating from Deering High School in 1966. He received a B.A. in Art History from Colby College in 1970, an M.A. in Architectural History from Boston University in 1979, and an L.H.D. from Bowdoin College in 2008, and an L.H.D. from the Maine College of Art in 2012.

At the age of thirteen, Shettleworth became interested in historic preservation through the destruction of Portland’s Union Station in 1961. A year later he joined the Sills Committee which founded Greater Portland Landmarks in 1964. In 1971 he was appointed by Governor Curtis to serve on the first board of the Maine Historic Preservation Commission, for which he became architectural historian in 1973 and director in 1976. He retired as director of the Commission in 2015.

Earle Shettleworth has lectured and written extensively on Maine history and architecture. The Maine Historical Society’s auditorium in Portland was named for him in 1999. In 2004 Governor John E. Baldacci appointed him as State Historian, and he was reappointed to a second term by Governor Baldacci in 2008 and to a third term by Governor LePage in 2014.