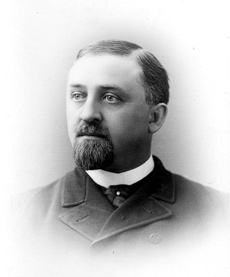 Augustus Freedom Moulton was born in Jay, Maine on May 1, 1848, the son of Freedom and Sarah Coffin Carter Moulton. From early childhood, he spent his life in Scarboro and Portland. He was educated in Scarboro public schools, Gorham Seminary, Saco High School, and Westbrook Seminary, from which he graduated in 1869. An 1873 graduate of Bowdoin College, he began practicing law in Portland in 1876. In 1927 he gave the college $200,000 to build the student union which bears his name.

Augustus Moulton’s public offices included representing Scarboro in the Maine House in 1878 and 1879, mayor of the City of Deering in 1898, and an alderman for the City of Portland.

Early in life, Moulton became interested in the history of Maine and New England. He served as historian for the Maine Society of the Sons of the American Revolution and was a member of the Maine Historical Society and the Maine Genealogical Society. In 1927 Governor Ralph Owen Brewster appointed him as State Historian, which he held until his death on March 16, 1933, at the age of 84.