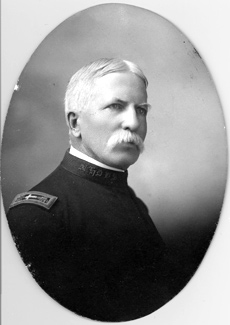 Henry Sweetser Burrage was born in Fitchburg, Massachusetts on January 7, 1837, the son of Jonathan Burrage and Mary Upton Burrage. He prepared for college at Pierce Academy and graduated from Brown University in 1861. After a year at Newton Theological Seminary, he enlisted as a private in the 36th Massachusetts Volunteer Infantry and rose to the rank of major. Wounded in the shoulder at Cold Harbor, he was captured at Petersburg and spent time in Libby Prison.

At the end of the Civil War, Henry Burrage resumed his studies at Newton, graduating in 1867. His first and only pastorate was at the First Baptist Church in Waterville, Maine from 1869 to 1873. For the next thirty-two years, he was the editor of Zion’s Advocate, a statewide weekly Baptist newspaper which was based in Portland. Highly respected in education circles, he was a trustee of Colby College from 1881 to 1906, Newton Theological Seminary from 1881 to 1906, and Brown University from 1889 to 1901. Active in veterans organizations, he served as chaplain of the National Soldiers Home at Togus from 1905 to 1912.

Burrage excelled in the research and writing of Maine’s Colonial history, as is reflected in his publications. He was a member of the Standing Committee as well as vice-president and president of the Maine Historical Society. In 1907 Governor William T. Cobb appointed him as State Historian, which he held until his death on March 9, 1926, at the age of 89.