Many archaeological sites are identified through cultural resource surveys required under Section 106 of the National Historic Preservation Act of 1966, when a Federal license, permit or funds are involved with an undertaking or State funds are used for projects that has the potential to negatively impact historic resources.  Knowledge of sites also derives from grant-funded surveys, surveys initiated and funded by private land owners, as well as from discoveries brought to our attention by the general public.

To be added to the list of approved archaeologists refer to Chapter 812 Section 3.  Send material for review to Kirk F. Mohney, State Historic Preservation Officer.

This section contains information primarily for use by professional archaeologist working in Maine.

Index of Archaeology Reports on File is a listing of archaeological reports on file at the Commission and accessible by approved archaeologists.

Human presence over the past 10,000 years, has created a variety of archaeological sites in today’s Maine.  Careful investigation of these has and continues to produce important information that shapes our understanding of the state’s unique cultural heritage.  Prehistoric (also known as pre-contact) archaeology attempts to reconstruct the lifeways of original Native American inhabitants from the end of the last Ice Age to the arrival of Europeans in the 14, 15, and 1600s AD.  Historic (or post-contact) archaeology focuses on European exploration, settlement and occupation generally ranging from the 1600s through the early 20th century.

The identification of Native American sites began in the early 20th century with excavations conducted by Warren Moorehead.  Continued research to date has succeeded in creating a remarkable understanding of numerous Native cultures and regional interrelationships spanning the Paleo Indian, Archaic, Ceramic and Contact periods.  Investigation of European sites includes early coastal fishing stations, trading posts and farmsteads, industrial sites focused on the milling of grains, timber products and textiles among others, forts and garrisons particularly of the French and Indian war period, sites of shipbuilding and shipwrecks, as well as homes and industries of the latter 18th and 19th centuries.  Continued discovery and documentation of these illuminates the many players, multifaceted composition and surprising ethnic diversity that contributes to our sense of Maine as a unique place. 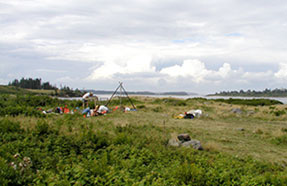