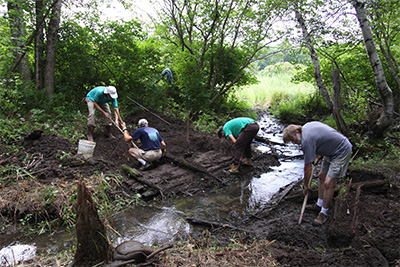 Historic archaeological sites began to be investigated by the MHPC in 1976 in response to increasing awareness of their potential to contribute a greater understanding of local, state and national history.

Historic resources brought to light by urban renewal projects in the hearts of many cities around the country played an important role in this recognition.

In Maine, archaeological sites of the early colonial period are the primary focus for identification, evaluation and protection.  This period is subdivided into three phases:  Early Settlement (1604-1675), Indian Wars (1676 to early 18th century) and Resettlement Period (early to mid-18th century).

Other sites of importance are those representing the earliest penetration of Euro-Americans into a given area regardless of period.

Sites relating to important individuals, events, land-based and maritime industries are also recognized, as are sites that can shed light on such topics as ethnicity, gender and religious diversity.

The Commission maintains the Historic Sites Inventory, which is a database of all known historic sites in the state.  Site inclusion derives from field identifications, features on historic maps and sites documented in primary and secondary literature whose precise location is not known.