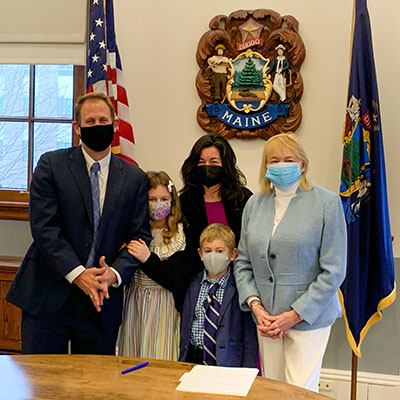 Governor Janet Mills today swore in Andrew Butcher as the first President of the Maine Connectivity Authority. Butcher, of Portland, was unanimously confirmed for the position by the Maine State Senate today. The Senate’s vote came just one day after the Legislature’s Joint Standing Committee on Energy, Utilities and Technology’s unanimous vote to recommend his approval.

The Maine Connectivity Authority is the new State entity charged with achieving universal availability of high-speed broadband in Maine. It was proposed by Governor Mills and created through bipartisan legislation sponsored by Senator Rick Bennett (R-Oxford) and co-sponsored by Representative Seth Berry (D-Bowdoinham) and the Co-Chairs of the Legislature’s Broadband Caucus. The Legislature unanimously passed the bill and Governor Mills signed it into law on June 25, 2021.

“I am grateful for the Senate’s unanimous confirmation, which is a testament to their confidence in Andrew’s experience and expertise to lead the Maine Connectivity Authority,” said Governor Mills. “With Andrew at the helm, and with the Authority’s Board fully in place, it is time to build on our work to expand access to affordable broadband. Broadband is no longer a luxury; it is a necessity for every person, every family, and every business across Maine, and with today’s vote, we are taking another step forward in our effort to make universal broadband a reality for Maine people.”

“I am humbled by unanimous confirmation of the Senate and am honored for the opportunity to serve Maine as we look to build the infrastructure of the future,” said Andrew Butcher, President of the Maine Connectivity Authority. “We can get there from here. Many have forged the path to get here and I'm eager to get to work connecting everyone. I'm grateful for the support, trust and partnership of the Governor, the MCA Board of Directors, and the Legislature.”

Governor Mills announced her intent to nominate Andrew Butcher on October 19, 2021. In addition to the role of the president, the Maine Connectivity Authority is governed by an eleven member board, seven of which are nominated by the Governor. Governor Mills swore in her nominees on July 20, 2021, just one day after they were unanimously confirmed by the State Senate.

Butcher’s confirmation builds on Governor Mills’ work to expand access to affordable broadband. Governor Mills dedicated $21 million through her Maine Jobs & Recovery Plan, which, when combined with the $129 million through the American Rescue Plan, will provide a total of $150 million to the Maine Connectivity Authority to expand access to affordable broadband.

In 2020, Governor Mills also secured the approval of a $15 million bond proposal for broadband, the first new investment in internet expansion in more than a decade. Governor Mills announced earlier this year that funding through the bond has been approved for 20 projects in 11 counties across Maine serving 8,571 locations. The Mills Administration is also spearheading a broadband mapping initiative to facilitate the expansion of broadband into areas with inadequate service.