Governor Janet Mills today swore in the Board of Directors for the Maine Connectivity Authority, a new State entity charged with achieving universal availability of high-speed broadband in Maine.

The Board of Directors is charged with governing the Authority and is comprised of seven members. The Commissioner of the Department of Economic and Community Development also holds a seat.

Their swearing-in comes one day after the Maine Senate unanimously confirmed the seven nominees and less than a month after Governor Mills signed into law the landmark legislation establishing the Authority, which also passed the Legislature with unanimous support.

“The lack of affordable, high-speed internet across Maine is not a new issue. What is new is the focus my Administration and the Legislature are bringing to finally get it done for Maine people. Now, with the Connectivity Authority and unprecedented Federal funding, we have a once-in-a-generation chance to build the connections Maine people need to succeed,” said Governor Mills. “I am honored to swear in these new board members and put to use their extensive knowledge and experience in deploying the resources Maine has received under the American Rescue Plan to build out high-speed internet infrastructure across Maine.”

Using $150 million in federal funds, the new Authority will work to ensure three goals: that effective, accessible connectivity be universally available in the state; that there be secure, affordable, reliable, competitive and sustainable forward-looking infrastructure that can meet future needs; and that all residents, businesses and institutions in Maine be able to take full advantage of the economic, health, educational, and other opportunities available through connectivity services. 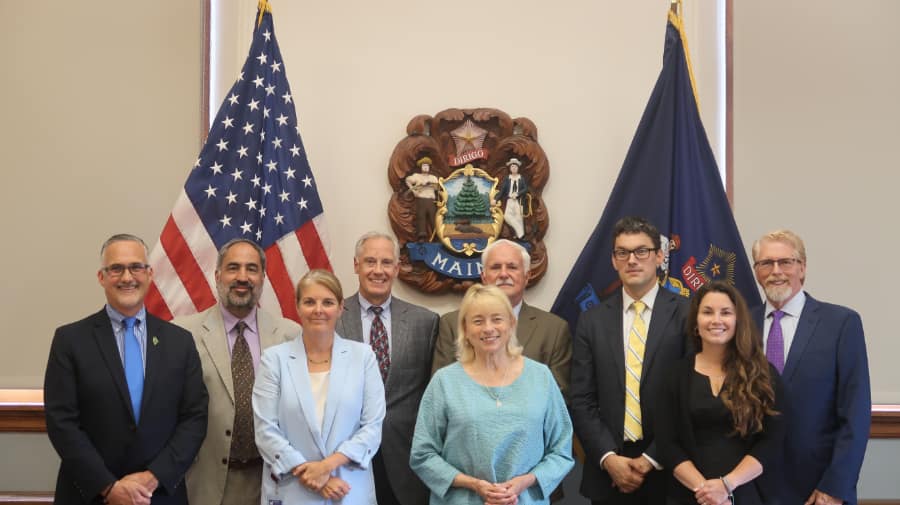 The creation of the Authority is the next step forward in Governor Mills’ commitment to expanding access to affordable broadband in Maine, one of her top priorities. Last year, the Governor secured the approval of a $15 million bond proposal for broadband, the first new investment in internet expansion in more than a decade, and her Administration is also spearheading a broadband mapping initiative to facilitate the expansion of broadband into areas with inadequate service.

The Governor swore in the following Maine Connectivity Authority Board Members:

Carlos Javier Barrionuevo of Georgetown works for Georgetown Broadband LLC and serves on the Georgetown Comprehensive Plan Committee. Since moving to Maine in 2015, Barrionuevo has been involved in the successful efforts to bring high speed broadband to Georgetown.

Daniel P. Belyea of Vassalboro is Chief Workforce Development Officer at the Maine Community College System where he has served for more than three decades. Belyea also serves on several boards, including Maine Technology Institute, State Workforce Board, and the Piscataquis County Economic Development Council. Belyea has an extensive background in financial and strategic planning, as well as capital project management.

John Chandler of Falmouth is a Principal at BerryDunn, an accounting and management consulting firm where he just completed a 22-year tenure as CEO and Managing Principal. In that position, he helped clients navigate a wide range of issues, including mergers and acquisitions, leadership transition, succession planning, and change adaptation. In addition to his client work, he serves as a senior adviser to BerryDunn’s leadership team, focusing on firm growth and strategic initiatives, particularly in the areas of collaboration, inclusivity, innovation, and purpose.

Danielle Louder of Augusta is Co-Director of Medical Care Development, Inc.’s Domestic Public Health Division and Director of the Northeast Telehealth Resource Center. Louder is a University of Maine graduate and serves on boards advocating for telehealth services that depend on broadband, including Maine Telehealth and Telemonitoring Advisory Group, National Consortium of Telehealth Resources Centers, and National Digital Equality Center.

Michael C. Reed of Palermo is self-employed and has worked to spearhead and coordinate municipal broadband projects, including assessing broadband needs in Maine towns, advising on broadband expansion solutions, and creating and evaluating Requests for Proposals. Reed has more than 50 years of business experience, the last 25 years dedicated to external relations leadership and consulting for companies operating in Maine, New Hampshire, Vermont, and New York.

Timothy R Schneider of Falmouth is General Counsel for Tilson Technology Management, Inc. Schneider previously served as a Maine Public Advocate from 2013 to 2017. During his time in the Office of the Public Advocate, Schneider worked tirelessly on broadband policy, building coalitions, and drafting legislation for the expansion of broadband across Maine.

Robert J. Souza of Durham has 46 years of telecommunications experience. Souza recently retired from Otelco, Inc where he had spent the last 18 years of his career. A graduate of Biddeford High School, Souza also served on the Telephone Association of Maine for 29 years.