Through the Maine Offshore Wind Initiative, launched in June 2019 by Governor Janet Mills, the state will explore opportunities for thoughtful development of offshore wind energy in the Gulf of Maine and determine how to best position Maine to benefit from an industry expected to generate $1 trillion in global investment by 2040. The Initiative aims to balance this industry development with our state’s maritime heritage and existing marine uses to ensure sustainable preservation of the natural resources in the Gulf of Maine.

Maine is also working closely with neighboring states and the federal government to evaluate regional opportunities in offshore wind energy in collaboration with maritime interests in the Gulf of Maine, particularly the fishing industry.

Aspects of the Initiative include:

To help keep the public informed about the development of the Roadmap and opportunities to engage in the Initiative, the state has launched a new offshore wind website at maineoffshorewind.org.

Why is Maine pursuing offshore wind?

Maine has a world class offshore wind resource off our coast and the Gulf of Maine represents one of our state’s largest untapped clean energy resources. Proven around the world, offshore wind can lead to economic growth and provide clean energy that combats climate change and reduces our dependence on fossil fuels. 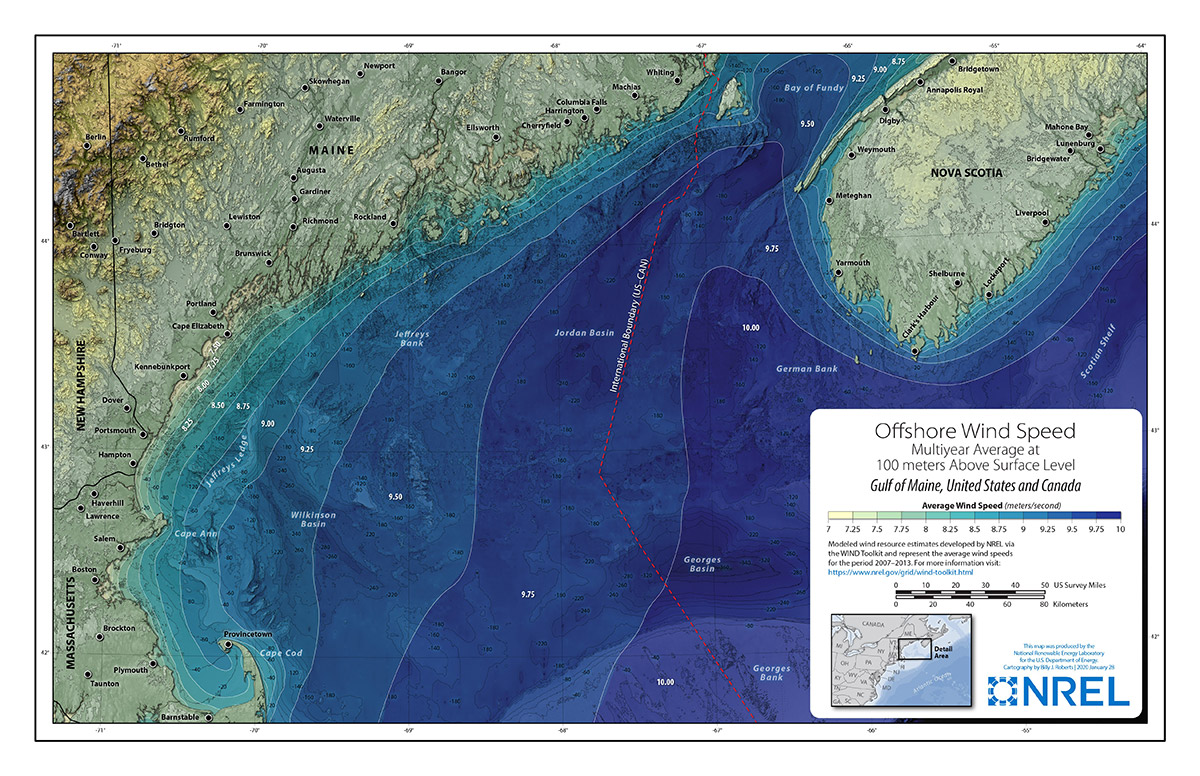 As a renewable energy source for Maine, offshore wind also has other advantages, according to the National Renewable Energy Lab:

Maine’s coastline and ocean waters are already facing the impacts of climate change - sea-level rise, warming temperatures and ocean acidification - which are threatening the future of Maine’s coastal communities and maritime industries.

Increasing renewable energy from offshore wind is part of Maine’s strategy to reduce fossil fuel emissions, a leading cause of harmful greenhouse gases that cause climate change.

Maine’s coastline and ocean waters are already facing the impacts of climate change - sea-level rise, warming temperatures and ocean acidification - which are threatening the future of Maine’s coastal communities and maritime industries.

What is the Maine Offshore Wind Initiative?

Launched in June 2019 by Governor Janet Mills, the Maine Offshore Wind Initiative is pursing responsible development of offshore wind energy in the Gulf of Maine and is determining how to position Maine to benefit from the industry. The Governor’s Energy Office has received a $2.16 million federal grant for the Initiative to develop a roadmap to advance offshore wind and evaluate its associated economic benefits, such as enhancing port facilities, growing Maine-based contractors and supply chains, and expanding workforce development and training.

The process to create a roadmap for offshore wind energy will take a broad, stakeholder-based, statewide perspective to chart the best path to develop Maine offshore wind responsibly and cost-effectively for the State. The roadmap consider topics such as renewable energy market projections; economic development strategies; supply chain analyses; and what research is needed to avoid, minimize, and mitigate impacts to existing marine users, especially fishing, and to the environment.

This planning process will occur at the same time as the permitting process for the offshore wind research array, so that both efforts will inform each other. The State is taking this approach because the array will provide important information essential to the development and implementation of the roadmap and because the roadmap development will also be informed by the research array.

What is the state’s offshore wind goal?

The State of Maine, through bipartisan support in the legislature, has established several laws to fight climate change, promote renewable energy, and reduce dependence on fossil fuels. The state is required to have 80 percent of Maine’s electricity from renewables sources by 2030, and a goal of 100 percent by 2050. Offshore wind is one of several important renewable energy resources needed to meet the state’s growing clean energy needs.

Maine’s Ocean Energy Task Force Final Report (PDF) (2009) set an ambitious goal of installing 5 GW (5,000 megawatts) of offshore wind by 2030. However, given a number of factors, this goal is not realistic at this point. The state is undertaking efforts to revisit this goal through further ongoing analysis as an important part of the roadmap effort.

What are the economic benefits to Maine of offshore wind?

Creating good paying Maine-based offshore wind jobs is central of the state’s initiative for offshore wind, and workforce development, training and other related programing will be an important part of the stakeholder-driven roadmap effort the state will launch later this year.

Maine’s 10-year Economic Development Strategy identifies offshore wind as a critical opportunity to grow the state’s economy, and encourages the state to set forth a balanced agenda that maximizes economic benefits for Maine people while creating a culture of innovation that creates a foundation for future leadership in this growing industry.

Maine has more than a decade of experience in the floating offshore wind innovation space, in particular through the work at the University of Maine. This collaboration, research and potential for other public-private investments in technology can make Maine a leader in the industry.

Advancing this work could make Maine a magnet for talented engineers, scientists, manufacturers and others to capitalize on our cutting-edge research and development.

In addition, an evaluation is now underway in Searsport to examine how it can grow to support the transport, assembly and manufacturing of offshore wind turbines to turn this economic potential into reality.

With offshore wind projected to a multi-billion industry in the U.S. over the next decade alone, and a growing pipeline of current active or proposed offshore wind developments along the East Coast, the timing for Maine to wisely develop this renewable energy industry as an economic driver to create sustaining, good-paying jobs in engineering, construction, manufacturing, and more is now.

Unique public and private assets and infrastructure, such as our long tradition of ship building and world-class training at Maine higher education and training facilities will help fuel new opportunities for marine-related jobs.

How will offshore wind co-exist with Maine's maritime industries and heritage?

The Initiative will work to develop offshore wind in the Gulf of Maine through thoughtful, collaborative, data-driven strategies that harmonizes with Maine’s heritage industries -- such as fishing and tourism – and the ocean environment.

Maine’s coastal communities depend on a thriving fishing industry critical to our economy and our cultural heritage. Existing users must continue to have access to the Gulf of Maine even as we benefit from new opportunities created by emerging industries.

As such, we must be thoughtful in considering where any offshore wind projects could be located and work to minimize any impacts on current and historical uses.

As innovation and technology allow us to better utilize the bountiful resources of the Gulf of Maine we must work together promoting these new opportunities while ensuring the sustainability for all.

Exploring options such as the utilization of the port of Searsport underscores how existing maritime assets in Maine could benefit from growth of offshore energy.

What studies exist about offshore wind as a climate change strategy?

The U.S. Department of Energy (DOE) and Department of the Interior (DOI) released a National Offshore Wind Strategy document (PDF) in September 2016 and another report, Wind Vision: A New Era for Wind Power in the United States (PDF) in 2015, that provides background on the value of offshore wind as a climate mitigation strategy.

There is consensus in the scientific community that greenhouse gases from human activity is the primary driver of climate change (see https://climate.nasa.gov/scientific-consensus/). According to the U.S. Department of Energy's Wind Vision Report (link to PDF), the power sector is the largest contributor of greenhouse gas emissions. (U.S. Department of Energy, 2015, xxxvii.) The following figure compares the life-cycle greenhouse gas emissions from both renewable (including offshore wind) and non-renewable electricity generation technologies.

New England Aqua Ventus is the first of its kind floating offshore pilot project that utilizes floating semisubmersible concrete hulls called the VolturnUS designed by the Advanced Structures and Composites Center at the University of Maine. In June 2019, Governor Mills signed into law LD 994 that required the Public Utilities Commission (PUC) to approve the contract for Maine Aqua Ventus. On November 5, 2019 the PUC approved the contract for the Maine Aqua Ventus pilot project.

Free, user-friendly access to expert-reviewed interactive maps and data on the ocean ecosystem, economy, and culture of the northeastern United States. Includes locations and status of current offshore wind projects on the US east coast (see Current Issues).

Summary of science on environmental effects of marine renewable energy development from around the world.