As a member of a statewide community of care givers, DDPC collaborates with individuals with severe and persistent mental illness and their community and personal supports to provide recovery oriented, respectful, compassionate, and effective psychiatric care and treatment in the least restrictive, safest, and most therapeutic environment we can create.

We focus on enhancing symptom management, promoting skill development, increasing knowledge, and challenging people to use their strengths to lead more hopeful and autonomous lives.

We devote ourselves to the most timely return of those we serve to a more independent, sustainable and hopeful life in the community.

We treat everyone we serve and everyone with whom we work with compassion, with dignity, and with respect.

Strive for Excellence. Exceed Expectations.
Value The Person. Treat The Illness.
Believe In Growth And Change.
Respect Boundaries.
Every Day Matters.
Never Give Up. 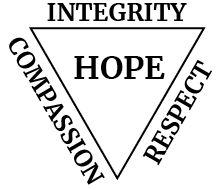 The Eastern Maine Insane Hospital was opened on July 1, 1901. It was built on a pastoral hill named 'Hepatica Hill' for its flowers overlooking the city of Bangor and the Penobscot River. Pine trees were planted around all of the driveways on the campus and have since grown to enormous sizes.

Within five days of opening in 1901, 145 patients were transferred from the Maine Insane Hospital in Augusta to the Bangor location. Patients were generally committed to the hospital by their community peers, such as town selectmen, family, etc.

Patients worked the fields, raised livestock, manned the laundry, sewing room and kitchen as part of their "treatment." This made the hospital self-sufficient and any excesses were sold at market to pay additional costs, until 1973 when the case of Sonder vs. Brennan went to court and it was determined that patients in public institutions could not work without being paid.

The name of the hospital changed in 1913 to Bangor State Hospital and then eventually to Bangor Mental Health Institute in the early 70's. The highest patient census was in 1970 with 1,200 patients; however, with a concerted downsizing effort in the 70's, the census fell to 470 in 1974. There were approximately 300 patients through much of the 80's.

Treatment for patients ranged from 'family' type care in the early 1900's to hydrotherapy and electrical therapies in the 1930's. The hydrotherapy and electrical therapies, however, were only used for a small number of patients. Most patients, who were thought to be incurable, received little specific treatment for their problems. New effective medications for mental illness became available in the mid 50's.