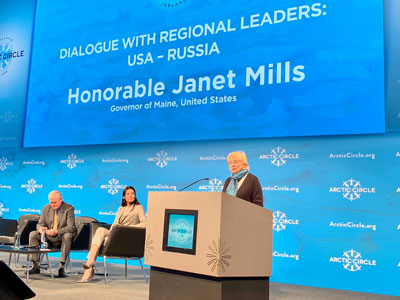 “Whether built by sailors navigating shared seas or students, industry or ideas, music or manufacturing, Maine is committed to strengthening the bond between our nations and regions as a true partner in the Arctic Circle Assembly. Maine is small, but Maine is fiercely determined. We know, as they say here in Iceland, there are no problems, only solutions.”

The Arctic Circle Assembly is the largest annual international gathering on the Arctic, drawing more than 2,000 participants from 60 countries, and is attended by heads of state and government, ministers, members of parliaments, scientists, entrepreneurs, business leaders, environmentalists, and others to discuss the future of the Arctic.

At the Assembly, Governor Mills has met with officials from Iceland, Greenland, and Finland to discuss economic development opportunities and strategies to combat climate change, among other topics. She also met with Ólafur Ragnar Grímsson, the Chairman of the Arctic Circle and former President of Iceland, and Jeffrey Ross Gunter, the U.S. Ambassador to Iceland. She also visited the Iceland Ocean Cluster and will tour the headquarters of international shipping company Eimskip, which has a regional hub in Portland, Maine.

Governor Mills full remarks before the Assembly are below:

One Thousand thirty-three years ago, the first Icelandic merchant laid eyes on the North Atlantic coast of North America. Blown off course on a trip to visit his parents in Greenland, Bjarni Herjolfsson, grandson of one of the early Norse settlers of Iceland, with no map and no directions, lost his bearings in the wind and fog, and missed Greenland completely. He pushed west for several days until the fog lifted and he set sight on a different coastline, one that was thickly wooded and laden with low rolling hills.

But, intent on finding his parents back in Greenland, Herjolfsson ignored the interesting new land mass he had sighted and found safe harbor days later in his father’s new land.

Some years later, a young adventurer named Leif Ericsson learned of the story, talked with Herjolfsson, bought his boat and set out to find the strange lands Herjolfsson had seen only from a distance. Looking for timber, Ericsson eventually made land and established a settlement in Newfoundland, Canada.

Today, a millennium later, we are not only reestablishing relations with the indigenous communities who inhabited our North American lands long before the Norsemen, we are also renewing our deep commitment to other lands, other cities and other people of the North Atlantic region — including those in this room — whose love of the ocean we share, of the air we breathe, of the climate we are prepared to defend is unparalleled.

And it is in these forums that we plan our shared future.

Maine and the Arctic nations — separated by all that wind and fog so many years ago — are now connected by more than a few intrepid sailors.

We are here, among other things, to renew and reinforce trade relationships with Greenland and the Scandinavian and other countries, fortified by expanding shipping routes.

We are pleased to partner with the oldest shipping company in Iceland, Eimskip, who recognizes the advantage of Maine’s deep ports and our location near both the Arctic and the population centers of Boston and New York. They have helped us transform an old facility on the Portland Maine waterfront into a bustling port, linking our state irrevocably to worldwide markets.

As a result, trade between Iceland and Maine increased more than four thousand percent over one two-year period as east coast businesses found new opportunities along the Green Line shipping route.

Next year, Eimskip will directly connect Maine to Greenland, expanding opportunities for trade and collaboration between our people in unprecedented ways. This sea route, forged by the explorers of our past and merchants of the present, is a reminder of how our communities can work together in the pursuit of a prosperous future.

Maine is poised to become the hub, the eastern gateway to the Arctic, a region whose allure we have shared since Portland Maine explorer Robert Peary set foot on the North Pole in 1909.

My own virgin voyage to this country and to this Assembly has opened my eyes to a basalt landscape that is other-worldly, to an edifice with honeycombed halls and 850 refracting prisms that shed the sharp light of reflection on two thousand minds with a communal focus on the Arctic Circle.

Here in Iceland we are not that far from the rolling forested hills of my state, a state that juts out of the northeast corner of the United States, that borders Canada, and bends toward Europe, a state that is 90% forested, with clean water, fertile farmlands, mighty rivers and deep ports, with 3,000 miles of bold rocky jagged coastline, my state is bathed by the same north Atlantic waters, the same rising, warming waves that lap the lava laden shores of this very island.

But it is more than ocean waters that draws us together.

It is more than the cultural and economic currents of our shared fisheries, our academic institutions, or our trade in broccoli, mint chocolate, potatoes, lobsters, lumber, blueberries and beer.

I knew when I heard the Crown Princess of Sweden yesterday talk about flying over the Arctic with other leaders to witness for the herself the tragic and dramatic loss of glacial ice.

I knew when I listened to the Premier of Greenland talk about the fish his people have caught for centuries so many of which now are found with plastic particles in their stomachs.

I knew when I met with President Grimsson, who has awakened the whole world to the concerns of the Arctic Circle.

I knew when I learned that the Gulf of Maine, my home waters, is warming faster than 99% of the world’s ocean bodies. And when I heard from our fishermen that our lobsters are moving north and eastward into colder waters; and when I saw a devastating breed of insects migrating from warmer climates, attacking and killing our moose.

I knew, it is not just our waters that draw us together.

It is, as well, a vision of a future where nations trust one another, where we can accept science without polemic, where we can work in a solid front, with a common goal, with sometimes uncommon means, to mitigate the disastrous effects of greenhouse gas emissions and global climate change on our natural resources, on our economy and on the health and very survival of our citizenry and our planet.

That is why I am here today.

My Administration, my state, is committed to fighting climate change and mitigating its effects.

In just nine months, we have enacted significant renewable standards for our state. We are investing in clean energy and conservation, electric vehicles and energy efficiency, community resiliency, and sequestration of carbon in our soil and forests through sustainable forestry practices. And we will soon be offering to you the most innovative floating offshore wind power systems in the world.

In our small state of Maine, we now have a Climate Council — made up of businesses, scientists, tribal and youth representatives, lawmakers and policy makers at all levels — We are putting our best minds together to determine what we have to do to reduce our greenhouse gas emissions, and to cut our appetite for fossil fuels, on which we have come to depend so much for heat, electricity and transportation and electricity.

Maine this year also joined the bipartisan “United States Climate Alliance,” a coalition of 24 states and Puerto Rico — a coalition that is determined to meet the goals of the Paris Agreement, reducing greenhouse gas emissions and combatting climate change. Although the current administration in Washington stated it intends to withdraw from the Paris Climate Accords, we 25 states and territories represent 55% of the population of the United States and an 11.7 trillion dollar economic force. And we believe in climate change. And we are committed to working with you to turn back this threat to the Arctic, this threat to our economy, this threat to the health and safety of our people, this threat to the world as we know it.

A few weeks ago, I stood before the United Nations General Assembly and promised the world that Maine will be carbon neutral by 2045. And we are taking steps every day to get there.

Because the threat is on our doorstep.

World scientists on the United Nations Intergovernmental Panel on Climate Change (IPCC) warned that if we do not take steps to reduce emissions and slow global warming, seas will rise three feet by the end of the century, with fewer fish, less snow and ice, stronger and wetter hurricanes and other, nastier weather systems.

Our work has begun in earnest, and Maine is proud to follow in the footsteps of many of our Arctic nation neighbors.

Trade and the environment and the new economy are inextricably intertwined.

Our forest industry is following in Finland’s footsteps as we transition from shuttered paper mills to advanced manufacturing products, high quality tissue and packaging.

The Maine International Trade Center has led our efforts to replicate Finland’s success through the “Forest Economy Roadmap,” a research-based, long-term plan to identify opportunities to diversify the forest products industry that is at the heart of our state.

The University of Maine has put us on the map for its commercial scale production of nanocellulose, which is sent all over the world for product development and which is finding uses as diverse as bone replacement material, nerve regeneration, and advanced building materials.

Just yesterday I signed an agreement with the Prime Minister of Finland for us to share forest research and sustainability practices in the face of a changing climate. As both of us depend so much on our forests, I know we can learn from Finland, and that Finland can learn from us.

Our fisheries and marine industries are also learning from the Arctic to meet the challenge of climate change.

This close collaboration between Arctic Circle members has fostered profitable ties between our business communities and has spurred innovation, opening doors to new markets, research and technological advancements.

Whether built by sailors navigating shared seas or students, industry or ideas, music or manufacturing, Maine is committed to strengthening the bond between our nations and regions as a true partner in the Arctic Circle Assembly.

Maine is small, but Maine is fiercely determined. We know, as they say here in Iceland, there are no problems, only solutions.

Prime Minister Jakobsdóttir said “It can be an advantage to be small. You can do things bigger and faster. You can actually change everything in a short amount of time.”

As a state which has also changed much in a short amount of time, Maine knows firsthand that we cannot wait for others to lead.

One thousand thirty-three years ago, one merchant from Iceland passed us by.

We will not let you go our way again, by the northern shores of the Atlantic continent, without your landing on our welcoming shores, without your remaining our friend forever.

“Hope then to belong to your place by your own knowledge of what it is that no other place is, and by your caring for it, as you care for no other place…”

Bjarni Herjolfsson thought his place was Greenland. Today our place is the entire Arctic Circle, our neighbor in destiny as well as distance, a place which we must care for as we care for as no other place in the world.