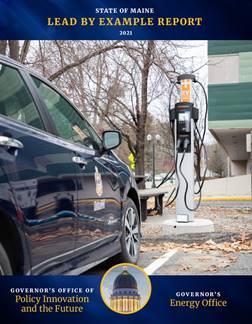 The report, authored by the Governor’s Energy Office and Governor’s Office of Policy Innovation and the Future, is the product of a multi-agency analysis ordered by Gov. Mills in 2019. The governor directed state agencies to “lead by example” in pursuing energy efficiency, environmental and sustainability practices to reduce operating costs, support state workers, and fight climate change.

The report is available at maine.gov/future/lead-by-example.

“By making changes in how they power their businesses, how they heat their homes, and how they drive to work, Maine people take steps every day to save money on their energy bills, reduce reliance on expensive and harmful fossil fuels, and save our state from the effects of climate change. It’s time that State government, a significant contributor to greenhouse gas emissions, does the same,” said Gov. Mills. “This report is our roadmap to creating a more energy efficient state government. The work to implement its recommendations begins now.”

“Under the leadership of Gov. Mills, Maine is taking great strides to reduce its greenhouse gas emissions and address the harmful effects of climate change on our people and communities,” said Hannah Pingree, Director of the Governor’s Office of Policy Innovation and the Future. “Using this report as a blueprint, the state has an opportunity to advance Maine’s climate leadership by setting an example for modern, forward-looking government operations that continues our fight against climate change, while supporting state workers and reducing costs to taxpayers.”

"As a longtime public servant dedicated to improving state government infrastructure, it is a thrill to be part of this important shift toward energy efficiency and renewable energy sources,” said Kirsten Figueroa, Commissioner of the Department of Administrative & Financial Services. "We are already starting to lead by example by adding electric vehicles for the state fleet and installing EV charging stations for use by the public. These efforts are showing how we can reduce emissions and operational costs as well."

“The investments in energy efficiency outlined in the ‘Lead By Example’ report can provide direct savings by lowering the state’s overall energy costs,” said Dan Burgess, Director of the Governor’s Energy Office. “When paired with the potential to use state lands and facilities to generate clean energy, Maine is able to reduce the costs of operations while contributing to the momentum of our clean energy economy.”

The report has set the following “Lead By Example” targets:

Support for these initiatives will come in part from $3.6 million in Volkswagen settlement funds, which were initially secured by Gov. Mills when she served as Attorney General. Under an agreement negotiated by Attorney General Aaron M. Frey, the Efficiency Maine Trust will administer these funds to support energy efficiency projects, while also offering technical assistance to state agencies.

“Climate change poses an existential threat to the health and well-being of the state, so it is important that Maine lead by example by reducing its agencies’ carbon footprint,” said Attorney General Frey. “This initiative is a major reason why I thought it was important to work with the Efficiency Maine Trust to ensure that the funds the Office of the Attorney General secured for the state as a result of the Volkswagen emissions settlement would be used effectively to address this urgent need.”

Per the governor’s executive order, progress on this “Lead By Example” effort will be reported every two years.

In 2019, Gov. Mills, with bipartisan support of the Maine Legislature, enacted some the nation’s boldest greenhouse gas emissions reductions and renewable energy generation targets, to protect Maine from the effects of climate change and grow a vibrant clean energy economy.

Since then, under the standard of Maine Won’t Wait, she has also committed Maine to further, urgent climate action, including achieving carbon neutrality by 2045, and more than doubling the state’s clean energy workforce to 30,000 by 2030 through increased support of workforce development and training, as well as emerging energy technology.