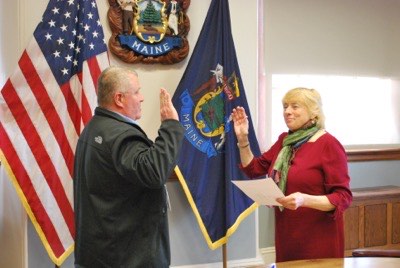 Governor Janet Mills today swore in Peter J. Rogers of Yarmouth as Director of the Maine Emergency Management Agency (MEMA). Rogers has served as Acting Director of MEMA since June 2019, his second stint as Acting Director, and as Deputy Director since 2014. His nomination was approved unanimously by the Joint Standing Committee on Criminal Justice and Public Safety and the Maine Senate.

“Peter Rogers’ skills and wealth of emergency management experience position him well to lead MEMA,” said Governor Mills. “I thank him for his willingness to serve in this important position and look forward to working with him to protect the safety of Maine people.”

“It is an honor to serve the people of Maine and to lead MEMA, an agency that I am proud to have been part of since 2014,” said Director Rogers. “The talented staff at MEMA work hard day-in and day-out to protect our people and our state. I look forward to continuing that work with them and am grateful for the Governor’s confidence.”

Rogers has also served as Deputy Commissioner of the Department of Defense, Veterans and Emergency Management after working in various roles within the Department for sixteen years. He also previously served as Communications Director in the Governor’s Office. He is a veteran of the U.S. Army, where he served for 22 years.  Rogers, 57, is a graduate of Norwich University in Vermont. He lives in Yarmouth with his wife and has five children.