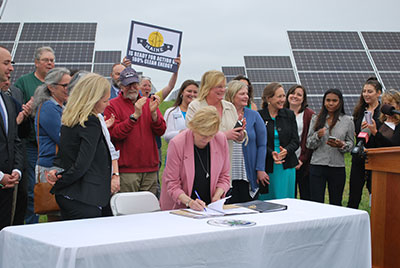 “With the signing of these bills, Maine is ushering in a new era of clean energy and climate leadership,” said Governor Janet Mills. “The Maine Climate Council will develop comprehensive action plans to meet our ambitious emissions reductions goals and the renewable energy legislation will spur clean energy development and investments that will increase production of homegrown, renewable energy and create good paying jobs for the people of Maine. Maine is once-again leading on clean energy.”

LD 1679 An Act To Promote Clean Energy Jobs and To Establish the Maine Climate Council, a Governor’s bill sponsored by Senator David Woodsome, will establish the Maine Climate Council that is charged with leading Maine’s efforts to reduce Maine’s Greenhouse Gas emissions by 45 percent below 1990 levels by 2030 and at least 80 percent by 2050. The Council will develop the action plans to meet the state’s greenhouse gas reduction goals, to promote jobs and economic benefits for Maine people in the transition to a lower carbon economy, and to support the climate resiliency of Maine’s communities. Governor Mills proposed establishing the Maine Climate Council in April.

“I am honored to have sponsored LD 1679...it has been in the making for several years and finally found a Champion in Governor Mills,”said Sen. Woodsome, R-York. “There is still much work to be done to make this effort comprehensive and economically effective. I look forward to achieving this goal.”

LD 1494 An Act To Reform Maine's Renewable Portfolio Standard, sponsored by Senator Eloise Vitelli, increases Maine’s Renewable Portfolio Standard (RPS) to achieve 80 percent renewable energy by 2030, up from 40 percent today and a goal of 100% by 2050. In addition, the bill requires the Public Utilities Commission to procure long-term contracts for new clean energy generation, which may be paired with advanced energy storage.  LD 1494 also requires the creation of a new thermal portfolio standard to incentivize efficient heating and cooling installations, contains several cost containment mechanisms including a $50 cap on alternative compliance payments, and requires renewable energy policy studies to be conducted in conjunction with other planning efforts. This bill gives Maine one of most ambitious RPS programs in the country. 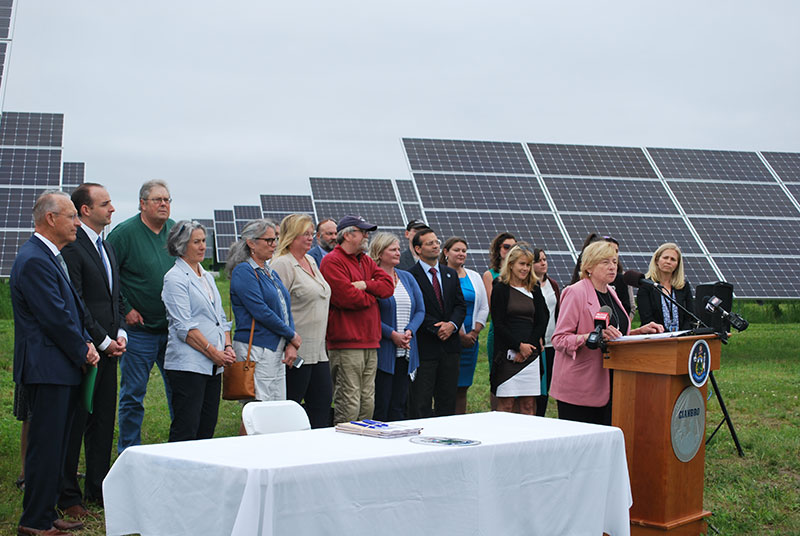 “Climate change threatens Maine’s environment and economy. We need to do everything we can to combat its effects, to preserve our state’s critical resources — our mountains, forests and waters — for future generations,” said Sen. Vitelli, D-Arrowsic. “I’m grateful for all the stakeholders who came together and put in the hard work to craft this measure. The update of our renewable portfolio standards provides the needed steps to protect our natural resources while investing in our economy.”

L.D. 1711 An Act To Promote Solar Energy Projects and Distributed Generation Resources in Maine, sponsored by Senator Dana Dow, will incentivize at least 375 megawatts (MW) of new distributed generation in Maine, which is expected to be primarily solar photovoltaic (PV) development for projects under 5 MW. The bill creates two separate but complimentary incentives, one for commercial and institutional customers and another for community shared projects, with prices that are set competitively and declining in subsequent procurements. The bill also removes the net energy billing account and size cap; requires that community shared projects serve low- and moderate-income customers; encourages development of landfill and brownfield projects and may incentivize the pairing with energy storage. In addition, L.D. 1711 allows for a new net energy billing program with an alternative bill credit for non-residential customers.

“This new law allows medium sized projects like schools and municipalities to get into the solar market and many larger solar companies are excited about the jobs it will create here in Maine,” said Sen. Dow, R-Lincoln.

The bills signed into law today build on several steps taken by Governor Mills to spur renewable energy development and fight climate change, including signing into law bills that will: 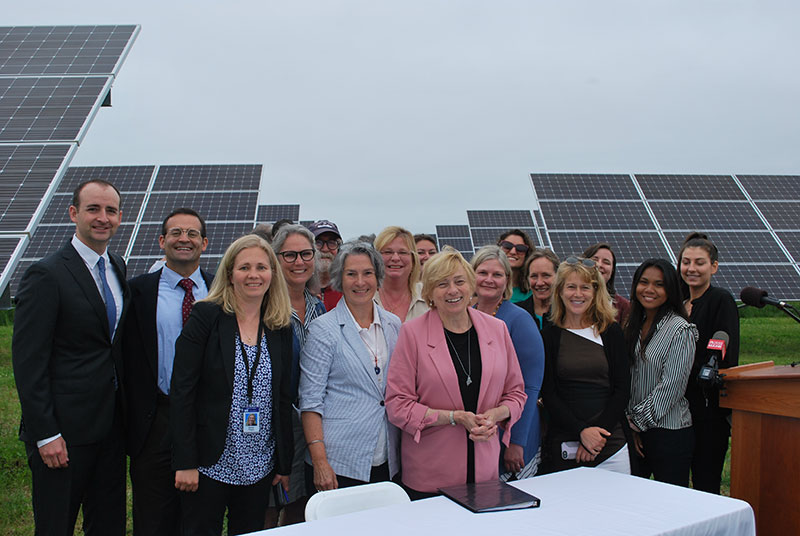 Renewable Portfolio Standards (RPS) require that a specific amount of the electricity sold to consumers come from renewable resources. Twenty-nine states, Washington D.C. and three territories have an RPS. Maine’s RPS is implemented by the Public Utilities Commission and prior to today’s bill signing, required 30 percent of electric load to be satisfied by existing renewable resources (Class II) and 10 percent by new renewable resources (Class I). LD 1494 creates a new Class IA that will require an additional 40 percent of Maine’s electric load be met with new resources in ten years, bringing Maine’s total RPS requirement to 80 percent by 2030.

The bill signing ceremony was held at the largest solar array in the state, 10 MW solar installation in Pittsfield, Maine that was constructed by Pittsfield Solar, LLC a subsidiary of Cianbro Corporation.