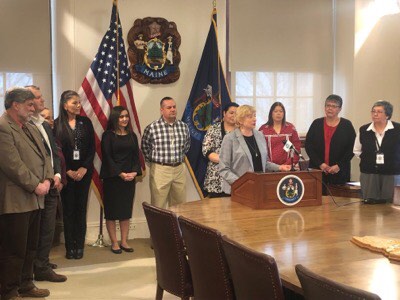 “Our history is by no means perfect. But, for too long, it has been written and presented in a way that fails to acknowledge our shortcomings,” said Governor Mills. “There is power in a name and in who we choose to honor. Today, we take another step in healing the divisions of the past, in fostering inclusiveness, in telling a fuller, deeper history, and in bringing the State and Maine’s tribal communities together to build a future shaped by mutual trust and respect.”

“On behalf of the Penobscot Nation and with all the Wabanaki and Indigenous People of Maine in our hearts we thank the Maine State Legislature, especially Representative Benjamin Collings and the bill’s cosponsors and supporters, and Governor Mills for this significant act,” said Ambassador Maulian Dana of the Penobscot Nation. “It shows a true intent to honor the Indigenous Nations of our State and brings all citizens to an elevated understanding and reconciliation of our shared history. I also want to thank all those involved in the efforts over the past few years to make these changes in towns and municipalities, they brought these important discussions to light and the conversations had a ripple effect all the way to the honorable law makers of Maine. We are graciously appreciative of this measure that reflects a state that feels more welcoming and inclusive. As the original stewards of these lands and waters we are happy that our ancestral ties and contributions are validated and celebrated instead of silenced and ignored by the previous holiday that glorified the attempted genocide of our Nations. Our past can be painful but our present and future can be brighter with acts of unity and honesty.”

“I was privileged to bring this bill forward on behalf of Maine’s tribal community,” said Representative Collings, D-Portland. “Maine’s tribes have played a vital role in building our state and will continue to influence our future. I am grateful to Gov. Mills for signing this bill today and paying tribute to those who truly deserve it.”

Governor Mills’ remarks as prepared are below:

Good morning, and thank you all for being here to mark this occasion.

I first would like to thank Chief Clarissa Sabattus of the Houlton Band of Maliseets, Chief Marla Dana and Vice Chief Maggie Dana of Pleasant Point, Chief William Nicholas and Representative Rena Newell of the Passamaquoddy Nation, Ambassador Maulian Dana and former Chief Barry Dana of the Penobscot Nation and Representative Donna Loring for being here today and for your advocacy of this legislation.

I would also like to thank Representative Ben Collings and Representative Rachel Talbot Ross for sponsoring this legislation and for joining us today.

As a result of your collective efforts, this bill passed the Legislature with bipartisan support.

There is a quote, often attributed to Winston Churchill, that says, “History is written by the victors.”

Our history – as we know – is by no means perfect.

But, for too long, it has been written and presented – through symbols, statutes, and holidays – in a way that fails to acknowledge our shortcomings.

I believe we are stronger when we recognize where we have erred.

I believe we are stronger when we seek a fuller and deeper understanding of our history.

I believe we are stronger when we lift up the voices of those harmed and marginalized in the past.

Because there is power in a name and in who we choose to honor.

Ambassador Dana explained it beautifully when she testified in support of this legislation and said, “Symbols, statues, names, mascots, and what we validate with institutions and governments all matter because it’s how we shape the views that dictate the behavior and actions. If you fight to keep a holiday that celebrates the attempted ethnic cleansing of my ancestors, what does that tell me about how you think of me as a human?”

Today, we take a step towards healing, towards inclusiveness, towards writing that fuller and deeper history.

I am proud to sign LD 179, An Act to Replace Columbus Day with Indigenous Peoples’ Day.

In doing so, we join the states of Vermont, New Mexico, Alaska, South Dakota, Oregon, and Hawaii in replacing Columbus Day with Indigenous Peoples’ Day.

And we follow the lead of more than 130 cities and towns, including, here in Maine, Starks, Orono, Bangor, Portland, Gouldsboro, Belfast and Brunswick.

With this bill, let us continue to heal the divisions of our past and bring the State and Maine’s tribal communities together to build a future shaped by mutual trust and respect.

I ask that Maine’s tribal leaders and representatives who are here today, as well as Representative Collings and any cosponsors present, stand with me as I sign LD 179 and officially establish Indigenous Peoples’ Day in Maine.