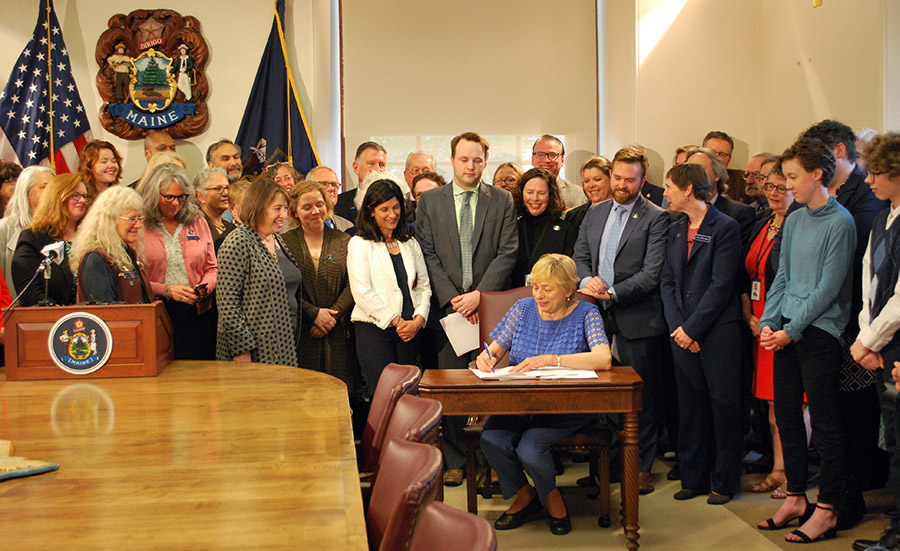 “Conversion therapy is a harmful, widely-discredited practice that has no place in Maine,” said Governor Janet Mills. “By signing this bill into law today, we send an unequivocal message to young LGBTQ people in Maine and across the country: we stand with you, we support you, and we will always defend your right to be who you are.”

“The legislature and Gov. Mills are sending a clear and concise message to our LGBTQ young people: You matter. You belong. And you are loved for who you are,” said Assistant House Majority Leader Ryan Fecteau. “So-called conversion therapy is irresponsible and harmful. I am so proud that Maine is standing tall to affirm that no young person needs to ‘fix’ what is not broken.”

"This law is the result of two years of tireless work by advocates, medical and mental health care providers, and lawmakers alike. It is so refreshing to have leaders who understand that being lesbian, gay, bisexual, or transgender is not a defect or disorder that can be treated, and we're so grateful to Representative Ryan Fecteau and Governor Janet Mills for their leadership,” said House Majority Leader and Equality Maine Executive Director Matt Moonen, D-Portland. “LGBTQ youth in Maine can rest assured that their government knows that their identities are valid, they are not broken, and the state of Maine will protect them from this heinous practice."

There is no credible evidence to demonstrate that conversion therapy can change a person’s sexual orientation or gender identity or expression. To the contrary, research has shown that these practices pose devastating health risks for LGBTQ young people that result in depression, decreased self-esteem, substance abuse, homelessness, and suicidal behavior.

Upon Governor Mills’ signature, LD 1025 will take effect 90 days after the adjournment of the Legislature.