Fulfilling a promise made during her State of the State address, Governor Janet Mills today signed into law a bipartisan bill sponsored by House Assistant Majority Leader Ryan Fecteau that will expand the amount of affordable housing in Maine. The Governor signed the bill during a ceremony in the Cabinet Room where she was joined by Representative Fecteau, Senator Matt Pouliot and other lawmakers from both sides of the aisle, and housing advocates. 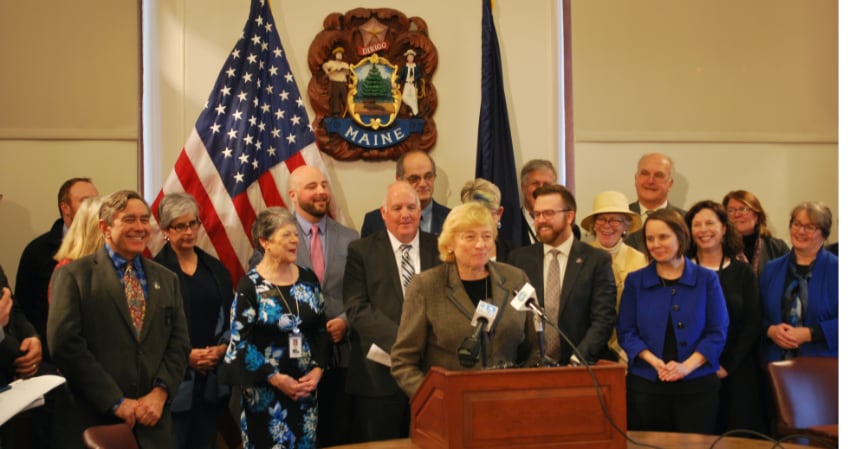 “In my State of the State address, I told the Legislature to send this bill to my desk. Now, thanks to the bipartisan work of Representative Fecteau and many others, I am proud to sign it into law,” said Governor Mills. “The goal of ensuring that Maine people have a safe place to rest their head at night, a place where they can take care of their family, get ready for work, and live with dignity and comfort is at the heart of our Administration. With this program, I hope we can now say to thousands more Maine people, ‘welcome home’.”

“This law is the result of strong collaboration. Our bipartisan group of cosponsors worked closely with the Maine Affordable Housing Coalition, contractors, residents of affordable housing properties, mayors and more to make sure we addressed the significant need for affordable housing across our state,” said House Assistant Majority Leader Fecteau, D-Biddeford. “As a result of our working together, the rate of production will increase, we’ll take advantage of important federal dollars and more Mainers will get the housing they need and deserve.”

“As I have said many times, if people do not have a good, safe place to call home, very little else that government does really matters,” said Senator Matthew Pouliot, R-Kennebec. “Now that Maine is the oldest state in the nation, the lack of affordable housing is especially crucial to our seniors. I co-sponsored this bill with Representative Fecteau to help create 1,000 more affordable housing units in Maine over the next eight years. The bill will make it possible to bring new units online while at the same time preserving the availability of existing units.”

“Maine is a place where everyone should be able to afford a safe, stable home,” said Dan Brennan, Director of the Maine State Housing Authority. “At a time when the housing choice voucher waitlist is over 20,000 people, this legislation is a critical investment in addressing Maine’s affordable housing challenges.” 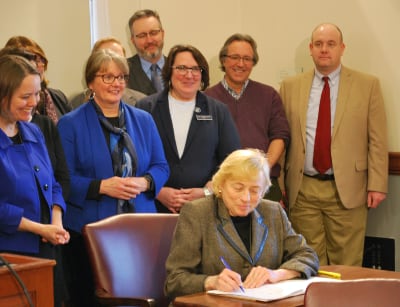 LD 1645, as amended by the Legislature’s budget-writing committee, aims to double the current rate of new affordable housing production by creating the Maine Affordable Housing Tax Credit program. The refundable credit, which would be administered by the Maine State Housing Authority, would be available to individuals or corporations who invest in affordable housing. The program would be capped at $10 million per year for eight years, with portions earmarked for senior housing and rural housing. It would also leverage an equal amount of federal low-income housing tax credit dollars.

Representative Fecteau worked with a bipartisan coalition of housing advocates, contractors, engineers and local officials to develop the proposal. It draws on the existing state Historic Rehabilitation Tax Credit as well as similar laws in more than a dozen other states, including Vermont, Massachusetts and Connecticut.

Speaking about the need for more affordable housing in Maine, Governor Mills called on the Legislature to pass the bill during her State of the State address, saying, “Send that bill to my desk and I will sign it.”

According to the Maine Affordable Housing Coalition, only about 52 available affordable housing units exist for every 100 Maine families earning 30 percent or less of the median income.