Governor Janet Mills today signed LD 735, An Act To Create a Permanent Wabanaki Law Enforcement Seat on the Board of Trustees of the Maine Criminal Justice Academy, sponsored by Representative Rachel Talbot Ross of Portland.

“The Maine Criminal Justice Academy Board of Trustees works to create excellence in law enforcement by listening to the diverse voices of elected officials, members of state and local government, and private citizens,” said Governor Mills. “By signing this legislation, we will also ensure the voices of Maine tribes are heard in the training and certification of our law enforcement officers and in advancing our shared goal of building a safer Maine.”

“I am honored to have brought forth the good work that former Tribal lawmakers, the Hon. Donald Soctomah and the Hon. Matthew Dana, have done to ensure that Maine’s Tribes have a decision-making voice in guiding law enforcement policy,” said Representative Rachel Talbot Ross, D-Portland. “The perspectives and experiences of the tribal community is critical in upholding public safety for all Mainers. I am pleased that the governor is formally recognizing this historic step forward by signing this measure into law.” 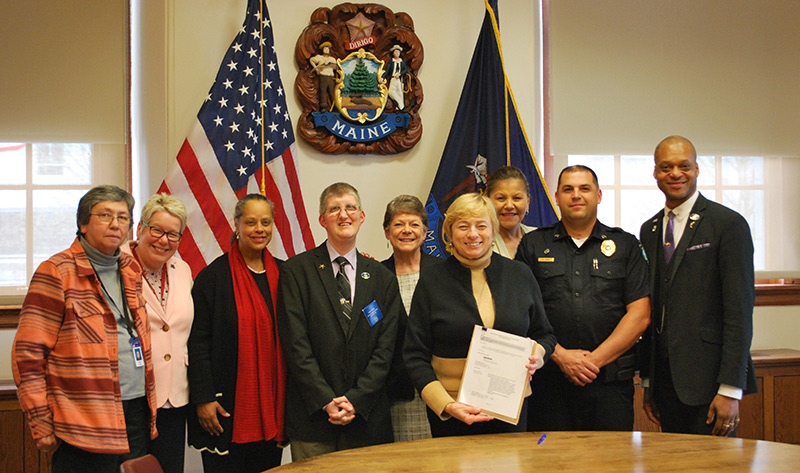 “I am very excited and encouraged by the signing of this bill,” said Penobscot Nation Police Chief Bob Bryant. “From the beginning, this bill was intended to provide a seat and a voice at the table for Tribal Law Enforcement in Maine, as part of a collaborative effort to incorporate a diverse perspective into the training, policy development and decision making process for the law enforcement profession in our state. We should celebrate the signing of this bill as another step forward as part of the inclusive working relationship between the Tribal Governments and the State of Maine.”

LD 735 establishes a permanent, Governor-appointed seat on the Maine Criminal Justice Academy’s Board of Trustees to be held by a person who is knowledgeable about public safety and who has been recommended to the Governor by the Wabanaki tribal governments of the Aroostook Band of Micmacs, the Houlton Band of Maliseet Indians, the Passamaquoddy Tribe at Motahkmikuk, the Passamaquoddy Tribe at Sipayik and the Penobscot Nation. The member appointed to this seat will serve for a two-year term.

The Maine Criminal Justice Academy Board of Trustees currently consists of seventeen members, including five elected public officials and twelve members appointed by the Governor to serve for a term of three years. Current members of the Board include representatives from municipal, county, state and federal law enforcement, state and county corrections officers, and five citizen members who are not and never have been a sworn member of a law enforcement agency.

Upon Governor Mills’ signature, LD 735 will take effect 90 days after the adjournment of the Legislature.