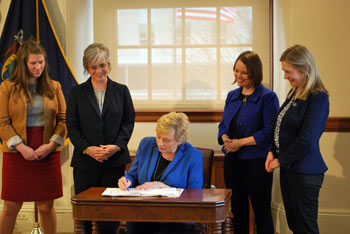 “Maine is a better place when we strive to ensure that all citizens are treated equally and fairly. By working to see that all people are paid based not on prior compensation, but on their experience, their abilities, and their qualifications, we can help level the playing field for women across Maine and enhance their economic security,” said Governor Mills. “This is good public policy and it is the fair and right thing to do.”

“The gender wage gap exists despite statutes and rules that prohibit wage discrimination on the basis of gender, and despite the good intentions of so many employers, human resource professionals, and advocates,” said Senator Breen. “As policy makers, it’s up to us to do all we can to narrow and someday eliminate the wage gap between Maine women and men. I’m proud of the work we were able to do on LD 278 – it’s the right thing to do for Maine women and Maine taxpayers.”

LD 278 An Act Regarding Pay Equality prohibits an employer from asking about a prospective employee’s prior wage or salary information until after an offer of employment has been made to the prospective employee, with exceptions included for federal and state law that require the disclosure of compensation history for specific employment purposes. Research shows that men with a bachelor’s degree make on average 20 percent more than their female classmates after just one year of employment. As a result, employers can perpetuate the wage gap by basing wages on salary history and not experience and qualifications.