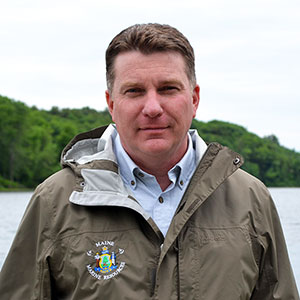 Commissioner Keliher is charged with conserving and developing Maine’s marine resources and coastal fishing industries, and working to advise local, state, and federal officials concerning activities in coastal waters. Keliher, a native of Gardiner, previously worked as a registered Maine hunting guide and charter boat captain. He also served as Executive Director of the Coastal Conservation Association of Maine, the Executive Director of the Maine Atlantic Salmon Commission, and Acting Commissioner of the Marine Resources Department before being appointed to serve as Maine's Department of Marine Resources Commissioner in 2012. He was re-appointed by Governor Mills in 2019.