AUGUSTA - The Department of Agriculture, Conservation and Forestry's (DACF) Maine Forest Service (MFS) recently published its Checklist of Maine Spiders (ARACHNIDA: ARANEAE). The spider checklist marks the culmination of a 14-year collaboration between deceased researcher and Maine spider expert Dr. Daniel T. Jennings and the MFS, as well as retired Forest Entomologist Charlene Donahue, and Maine Department of Inland Fisheries and Wildlife (MIFW). Jennings passed away September 14, 2020, as the final details of the publication were being worked out.

"Most people don't count spiders among their favorite creatures," commented Allison Kanoti, State Entomologist. "But spiders are an important part of our world, and we depend upon their existence."

The Checklist of Maine Spiders (ARACHNIDA: ARANEAE) is available online for anyone interested in cataloging their encounters with these fascinating residents of Maine, and the detailed information on the 71,000 specimens Jennings identified is available from the MFS.

About the Checklist of Maine Spiders Project

In the fall of 2006, representatives of the MFS and MIFW met with Dr. Jennings to devise a plan that would allow him to continue his work on identifying Maine spiders. The goal was to understand better what lives in Maine and publish a checklist of Maine spiders so that others could then use this baseline information. At the time of the meeting, Jennings had identified 586 species from Maine. With the support of DACF and MIFW, Jennings' existing database was expanded, and he identified another 91 species, bringing the total to 677 different kinds of spiders found in Maine.

Seventy-one thousand individual spiders were collected, cataloged, and identified by Jennings. Most were collected by Jennings or through his work with Franklin Graham on the Spiders of Milbridge (Washington County) and Nancy Sferra on the spiders of the Waterboro (York County) pine barrens. Many others came from the University of Maine research projects (particularly on spruce budworm and blueberry production, and many graduate student projects) and MFS bark beetle and wood borer traps. Still others were gathered on a spider BioBlitz held in Acadia National Park in 2007 and through material submitted by curious collectors.

There is more work to be done on understanding Maine's spider fauna. Not only is the data collected through Jennings' work rich in details not captured in the checklist, but there are also undoubtedly undiscovered species to be documented. These could include spiders that extend their ranges northward with a warming climate and those which remain uncatalogued due to under-sampling of some Maine areas and the varied natural features of the state.

Although fishing spiders can be startling because of their size (with their bodies sometimes exceeding an inch, and their legs more than four inches), they pose no threat to people or pets. As one might guess from their name, they are found in wetter environments and sometimes capture small fish. 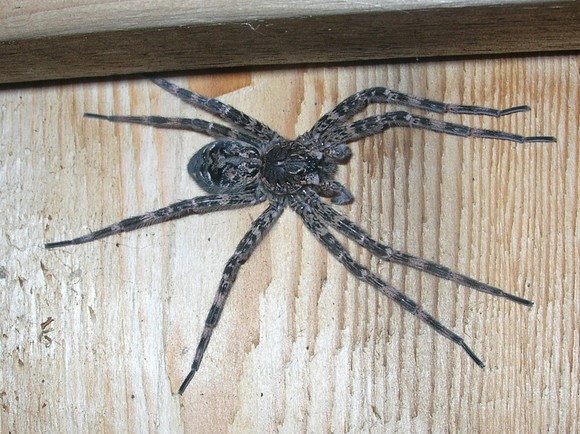 Cave orb weavers, like the one pictured with her egg sac, can be found in habitats similar to entrances of caves, including rocky overhangs and basements. When spiders are found inside our homes, it is most often because there is other arthropod prey available and/or by accident (i.e. they have been carried in on something else, or are seeking a sheltered location). 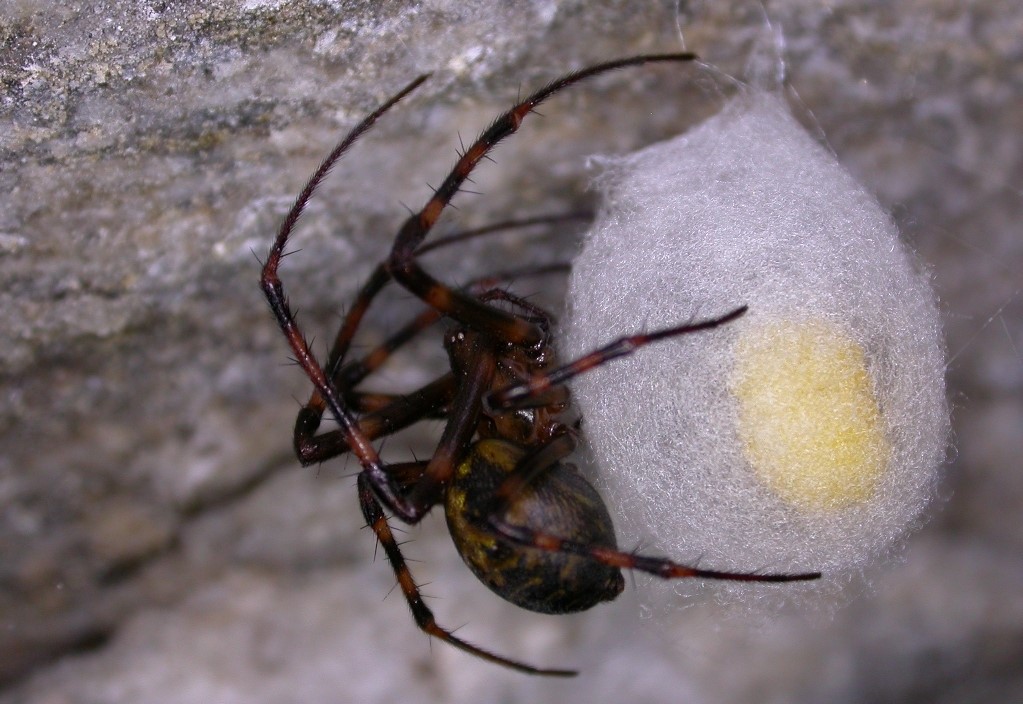 In the same family of the cave orb weaver, this bright green, adult male longjawed orbweaver was spotted one early March, sharply contrasting with the snow in the understory of a hemlock forest in Lincoln County. 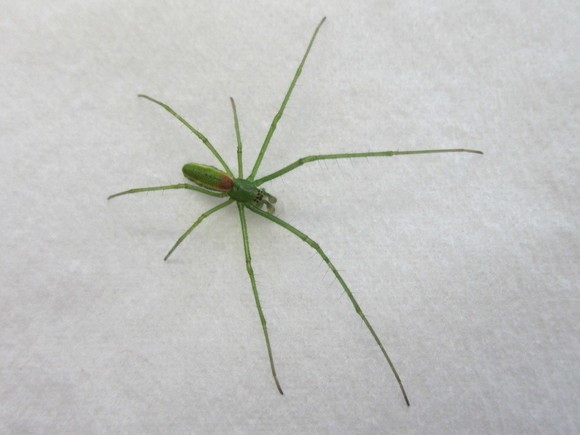