Portland, ME -- The Maine Department of Agriculture, Conservation and Forestry (DACF) is reporting that emerald ash borer (EAB), a destructive forest insect from Asia, has been detected in Cumberland County. Officials with the USDA Animal and Plant Health and Inspection Service (APHIS) have confirmed the identification of an adult beetle found on a trap in Portland, Maine. An initial look by City and Department staff did not reveal additional signs of the insect. Further surveys are planned during the insect's dormant period.

Emerald ash borer was discovered in northern Aroostook County in May 2018 and later in York County in September 2018. The State of Maine established a quarantine to regulate the movement of ash trees, ash wood, and all hardwood firewood to slow the spread of this very destructive pest. The Maine Forest Service will issue a stop movement order on the same materials from Portland and towns within a 10-mile buffer, including: Cape Elizabeth, Chebeague Island, Cumberland, Falmouth, Gorham, Long Island, North Yarmouth, Portland, Scarborough, South Portland, Westbrook, Windham, and Yarmouth.

The new find is likely the result of firewood transport into the area, since the closest known infestation is over 40 miles away in Lebanon. On their own, the beetles only travel to 2 miles a year. The City of Portland, known as the "Forest City," has had an active urban and community forestry program for over 100 years and has already done much work to prepare for this destructive pest and other forest threats.

The City maintains an inventory of all public shade and street trees. There are just over 600 individual ash trees planted along city streets and public parks. There are also many native ash trees in the forests and pockets of woods that skirt the city, especially along waterways such as the Presumpscot River. The city plans to monitor for expansion of the infestation with the Maine DACF and local conservation groups and will prioritize treatment and removal of infested ash.

Emerald ash borer was first discovered in the Detroit, Michigan area in 2002, though it is believed to have arrived in the 1990s. The beetle is about one half an inch and metallic green. Its larvae tunnel through the wood just under the bark of ash trees (Fraxinus spp.) and can kill even healthy trees in 4-5 years. Tens of millions of trees across the country have been killed.

Ash trees comprise 4% of Maines forest and are an important street and shade tree. Emerald ash borer threatens all species of ash trees (but not mountain-ash) and can have significant ecological and economic impacts. There are no practical means to control EAB in forested areas, although pesticide treatments can protect individual trees. Biological control, in the form of tiny, non-stinging wasps that attack EAB, has been started in Maine with releases in forested areas in the Madawaska area. In urban and residential areas, high-value trees can be protected using insecticides. This approach is recommended only after EAB has been found within 10 miles of the trees in question.

Staff from the Maine Department of Agriculture, Conservation & Forestry and the City of Portland will be on hand to answer questions at Payson Park at the corner of Fernald Street and Payson Park Roadway (Catafalque Drive) in Portland on Monday, October 21st at 1 PM.

More information about emerald ash borer is available at: 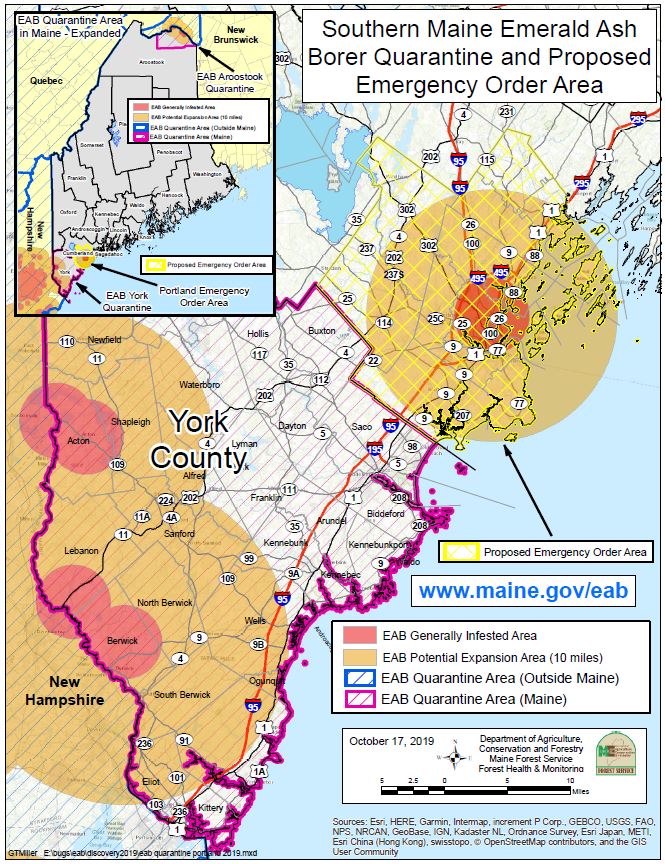