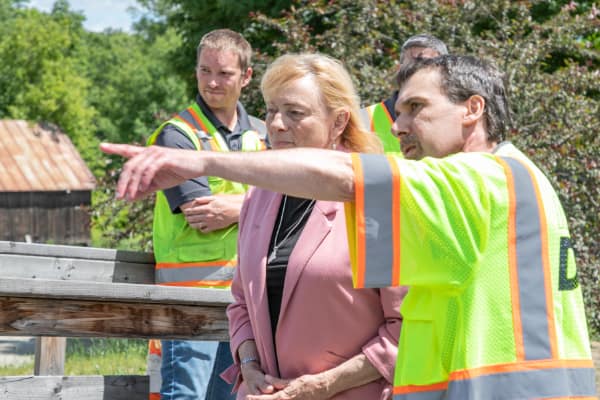 The Maine Western Gateways Project is MaineDOT’s initiative to revitalize the highway corridors that lead to Maine’s western mountains, including several ski slopes. The project involves reconstructing and rehabilitating parts of Route 27 in Kingfield, Route 302 in Fryeburg, and Route 26 in Woodstock. It also includes sidewalk and shoulder improvements designed to enhance mobility and safety for bicyclists, pedestrians, and vehicles.

In addition to providing safer transportation options for vehicles, cyclists, and pedestrians, the Maine Western Gateways Project will strengthen Maine’s economy. The roads under construction provide access to rural forestlands that are vital to the forest industry, which supports more than 33,000 jobs and generates $8.5 billion in economic activity for Maine. The roads also provide access to western Maine’s recreation areas, including hiking trails, snowmobile trails, lakes, mountains, and streams, as well as winter ski resorts which are used for business conferences weddings, mountain biking, and golfing during the summer months. The roads also connect Maine residents with Canada and neighboring New Hampshire, promoting cross-border commerce.

“The Western Gateways Project is the perfect example of how we can modernize rural infrastructure to ensure that our roadways are safe for people and strong for our economy,” said Governor Mills. “This work in Kingfield will strengthen the local economy, bolster the forest products industry, support tourism, and improve public safety.”

“The roads that are part of MaineDOT’s Western Gateways Project are critical connections that support economic opportunity and quality of life in the villages in the western part of Maine,” said Bruce Van Note, Commissioner of the Maine Department of Transportation. “This is how investments in infrastructure can make real differences in the lives of the people who live, work, and recreate in our great state.”

“Maine’s roads and highways help people get to work, support the safe transportation of goods and services, and help bring tourists to our state,” said Heather Johnson, Commissioner of the Maine Department of Economic & Community Development. “The Maine Western Gateways Project will strengthen infrastructure critical to the health and vitality of Maine’s rural economy.”

Route 27 in Kingfield is part of the Maine Scenic Byway and provides access to Sugarloaf Ski Resort, which hosts 350,000 skiers annually. Kingfield is also home to a Poland Springs Water bottling plant, the fourth largest manufacturer in Franklin County.

Route 27 is also an important international commerce route, used by truckers for wood products headed to Fontaine Lumber in Quebec and to Stratton Lumber in Stratton. Wood chips are delivered to Stratton Energy, the 48-megawatt biomass electric generating plant in Stratton, while trucks carry “quick lime” from Quebec to the paper mills in Rumford, Livermore, and Skowhegan.

The border crossing port at Coburn Gore is also the most direct route from Montréal and Sherbrooke, Quebec to Maine and the Maritimes, with Route 27 ending in Boothbay Harbor.

MaineDOT’s work in Kingfield will address the road’s numerous potholes, rutting, and weak side slopes; repair poor drainage; and update outdated guardrails to protect drivers from the Carrabassett River. It will also improve outdated pedestrian signage to improve safety. The project is expected to cost $9.2 million and is being supported by Federal grant money. Sargent Corporation, a Maine-based contractor, is completing the work.

No other governor in Maine history has invested as much State funding to the Maine Department of Transportation than Governor Mills. While the MaineDOT’s operations are largely funded through the Highway Fund, Governor Mills signed a biennial budget that dedicated an additional $50 million in General Fund – an unprecedented amount – to the Department for capital projects and stipulated that MaineDOT receive 20 percent of unappropriated surplus at the end of the year. This is in addition to the estimated $2.4 billion in federal funding Maine is expected to receive under the Bipartisan Infrastructure Investment and Jobs Act for transportation improvements.

After her tour of the Maine Western Gateways Project, Governor Mills toured the Herbert Grand Hotel in Kingfield. The hotel was purchased earlier this year by Sugarloaf to help expand housing options for employees. The Governor toured the hotel and received a briefing from Dana Clukey, Vice President of Lodging and Property Support for Sugarloaf.

The Governor’s visit to Kingfield comes as she travels across Maine. The Governor has visited Penobscot, Piscataquis, Sagadahoc,Cumberland, Kennebec, York, Somerset, Androscoggin, Lincoln, and Knox counties.