For more details regarding library hours and services, click here.

Here is how you can create your own unique public value statement if none of the examples listed work for you.

An Example for One Library Service: Early Reading Programs

The first graphic shows this for a library’s early reading program for pre-school children. 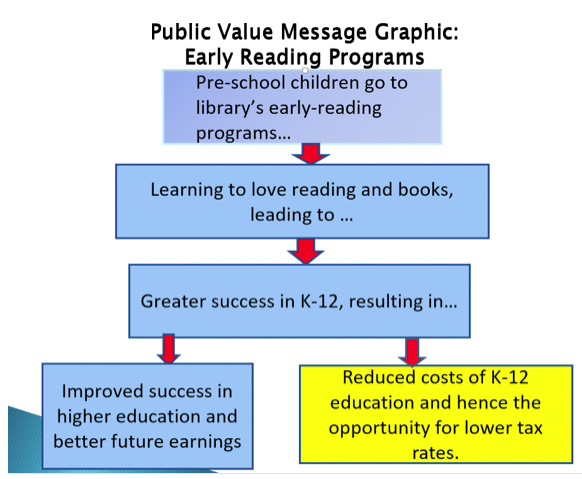 Starting at the top with a specific program (pre-school children go to the library’s early-ready programs). As a result, they learn to love reading and books, leading to greater success in K-12, resulting in improved success in higher education and better future earnings. Also, their greater success in K-12 reduces the cost of their K-12 education and hence reduces taxes for schools or allows the funds to be used on other important needs, holding down costs to taxpayers.

Taxpayer Stakeholders Interested in Return on Investment: The yellow box assumes that the non-patrons stakeholders are taxpayers who are primarily concerned about how an “investment” in the library benefits them – not the children in this program. This reflects economists’ assumptions that people are willing to pay taxes if it is in their own “enlightened self-interest” but not because it benefits others.
There is support for this view in the report “From Awareness to Funding” finds that support for libraries is moving away from altruism for others toward return in investment. “Library funding support is not based on a vague sense of altruism, but based on a real economic return for individuals, families, and communities.” (From Awareness to Funding, Chapter 6, page 6-12 From Awareness to Funding: A study of library … – OCLC )

Altruism for Others: If there is a shift from altruism to a strict return on investment (ROI) philosophy, this is a sad trend. Yet, even within philanthropy, there is a movement toward “effective altruism.” Effective altruism is focused on whether the funds actually deliver the results to the direct beneficiaries of the program as promised. The graphic above is exactly the same except that the stakeholders making the investment expect very little or no ROI for themselves.

How does Public Value Message Change for Altruistic Donors? Two possible changes are possible. One is to simply omit the part in yellow. The second is to have the part in yellow focus on the community rather than the individual’s taxes. For example, it might end with: “Also, their greater success in K-12, results in them become more productive citizens and benefitting their community as adults.” Or “Also, their great success in K-12 results in lower costs for education so that the town can put a little more into “X” (low-income housing, drug rehabilitation, programs for seniors, environmental programs, etc.).

The next graphic can be used to develop your own unique public value statement, based on programs or services that your library has, specific patrons it serves and specific non-patrons.

Here’s some key points in using the graphic: