Offshore Wind Resources in the Gulf of Maine

The Gulf of Maine is one of the largest semi-enclosed coastal seas in North America with a rich, dynamic ecosystem. It is nourished by cold ocean waters and with a complex geomorphology made up of deep basins and shallow banks.

Powerful tides mix the influx of North Atlantic waters with fresh waters from 60 rivers which drain a large watershed spanning the states of Maine, New Hampshire and Massachusetts and two Canadian provinces.

Recognized as one of the world’s most biologically productive marine ecosystems, various marine and estuarine habitats, such as salt marshes, seagrass beds, tidal mud flats, underwater rocky outcrops, and kelp beds provide a home to over 3,000 marine species and birds.

Coastal marshes and estuaries serve as nurseries and feeding grounds for fish, crabs, and shellfish, and abundant plankton provide the base of a rich food web all the way up to large fish, seals and whales.

The Gulf of Maine has a world-class offshore wind resource, with ninety percent of the wind resource exceeding 9 meters per second (m/s). A large quantity of these high average wind resources are located in waters greater than 60 meters with the potential to generate 156 GW of wind energy (https://www.energy.gov/eere/wind/downloads/national-offshore-wind-strategy-facilitating-development-offshore-wind-industry).

The marine economy in the Gulf of Maine region is constantly evolving as it adapts to changing demands for products and services and supply of natural resources. The Gulf of Maine marine economy is fueled by a variety of activities including commercial and recreational fishing, aquaculture, tourism, transportation and ship/boat building. With over two-thirds of the population in the region residing along the coastline, pressure on coastal and ocean ecosystem health is greatly influenced by human interactions.

For more information about the Gulf of Maine, visit: http://gulfofmaine.org/public/state-of-the-gulf-of-maine/ 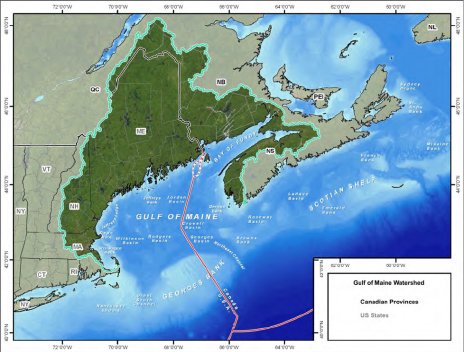 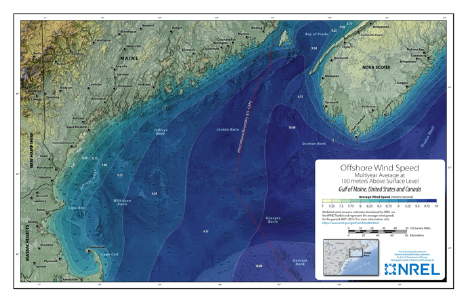