On 11/15/2021, Cpl. Cote stopped Calvin Powell (30) of Portland on the ME Turnpike southbound in Gray.  His ME driver’s license was found to be suspended.  He was charged with Operating after Suspension and his vehicle was towed away.

On 11/15/2021, Cpl. Cropper was responding to I-295 to assist Troop B with multiple crashes at exit 8 NB. While in route, Troop G received a complaint of a white Honda doing 100 MPH and driving erratically while NB from Exit 42. Cpl. Cropper departed at exit 44 and by the time he reached the Fore River Bridge on 295, the Honda had crashed and stopped in the passing lane. Cpl. Cropper stopped to investigate and as he was approaching the vehicle on foot, it fled the scene. Cpl. Cropper went after the vehicle and advised the ARCC that the vehicle had fled. The Honda stopped at the Exit 5 (Congress St) gore. A high-risk traffic stop was initiated but the operator failed to comply with verbal commands. The Honda then fled again and continued NB on 295 at speeds in excess of 70 MPH. The Honda passed a vehicle using the breakdown lane and then stopped again just prior to Exit 6A (Forest Ave). A high-risk stop was initiated again and this time the driver showed her face and hands out the window. As Cpl. Cropper approached and observed that the female operator was hands free, he opened the vehicle from the inside and then went to unhook the operator’s seatbelt when the operator assaulted Cpl. Cropper. The operator was identified as Caitlin J. Black (33) of Milton, NH.  Black was visibly intoxicated and was transported from the scene to Maine Medical Center for an evaluation. Black was released on personal recognizance after being summonsed for OUI-Alcohol, Aggravated Driving to Endanger, Eluding, Simple Assault, and Failure to Submit to Arrest. Sgt. Farley and Tpr. Burke (Troop B) and Tpr. Loder (Troop G) assisted on scene.

On 11/18/2021, Cpl. Cote stopped Noah Martin (24) of Cushing on the ME Turnpike northbound in Gray.  He was found to be under the influence of intoxicants and put through a battery of field sobriety tests leading to his arrest.  He was taken to the Troop B Barracks where he was administered a Breathalyzer test.  The results were over the legal limit.  He was charged with Operating Under the Influence.

On 11/20/2021, Cpl. Cote investigated a crash that occurred on the ME Turnpike at mile 47 northbound in Portland by the Westbrook Street overpass. A two axle 2014 Hino large box truck full of Amazon packages was traveling northbound when the unit experienced a mechanical issue causing it to leave the roadway into the median where it rolled over and up onto both guardrails. The truck slid on the guardrails and came to rest on them just before the overpass. It sustained extensive damage. One end stuck out in the northbound lanes and the other into the southbound lanes. The operator was transported to ME Medical Center with non-life-threatening injuries. Both travel lanes on both sides of the highway were shut down and it took crews several hours to remove the truck. 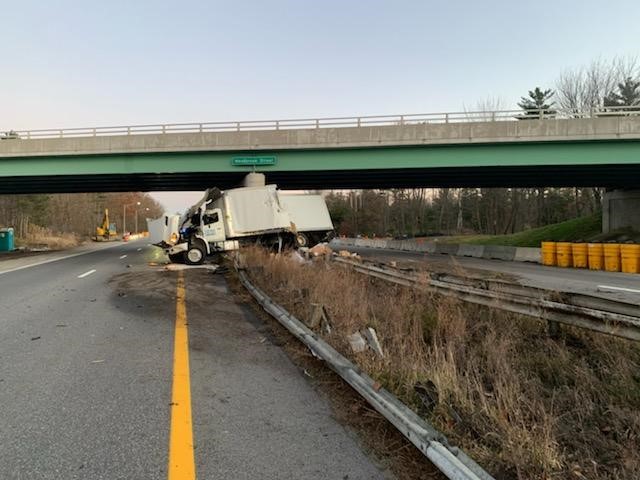 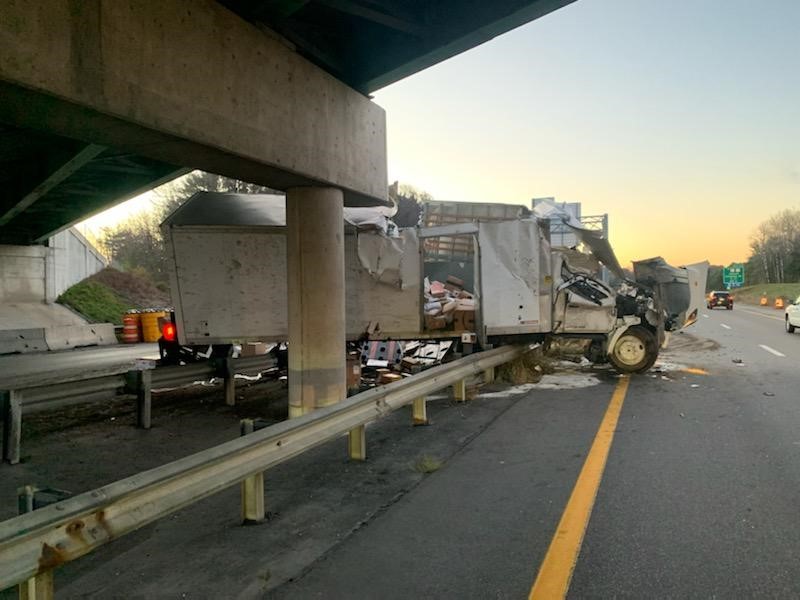 On 11/20/2021, at approximately 2:45 p.m., Tpr. Keim responded to a single vehicle crash at mile 100 on I-95 in Litchfield at the West Gardiner Toll Plaza. Upon investigation it was discovered that a vehicle traveling southbound crashed into a guardrail, redirected itself back onto the highway, and then struck the center pylon at the toll plaza causing the car to burst into flames. The single occupant of the vehicle was pronounced dead at the scene. The Office of the Chief Medical Examiner will conduct an autopsy this week to determine the identity of the driver. The crash lane was closed for a couple of hours while the car was removed. The high speed lanes remained open. Sgt. Porter, Tpr. Bourdelais, Tpr. Ellis, Cpl. Peckham, and Tpr. Dunn assisted on scene, as well as the Gardiner Ambulance Service and the West Gardiner, Litchfield, and Augusta Fire Departments.

On 11/21/2021, Tpr. Ellis stopped Ashlee McLaughlin (34) of Brunswick on the ME turnpike for speeding southbound in Scarborough. Her license and registration were both found to be suspended. She was charged with Operating After Suspension. Her vehicle was towed away.