On 09/27/2022, Cpl. Cropper stopped a vehicle traveling northbound in Portland after the operator reportedly fled from Saco Police Department Officers. The operator was suspected of operating under the influence. Tr. Wilcox conducted standardized field sobriety testing and placed Michael Katamba (29) of Lewiston under arrest for Operating Under the Influence. Katamba provided a breath sample and was subsequently summonsed.

On 09/27/2022, Cpl. Cote stopped Juliette Levesque (24) of Minot on the ME Turnpike southbound in New Gloucester.  Her ME Driver’s License was found to be suspended.  She was charged with Operating after Suspension and Possession of a Suspended License.  Her vehicle was towed away.

On 09/27/2022, Tr. Walp summonsed Edgar Garcia (38) of Portland for Operating after Suspension. Garcia produced a fake international driver’s license that was also confiscated.

On 09/28/2022, Tr. Ellis stopped Thomas Forlini (36) of Rhode Island for speeding on the ME Turnpike southbound in Arundel. His license plates were found to be falsely attached. He was summonsed for the speed and registration violation. The vehicle was towed.

On 09/28/2022 at approximately 2223 hours, Troopers Verhille, Bourdelais, Ellis, DeGroot, and Sergeant Casey all responded to a report of a dump truck rolled over in the northbound lane on the Maine Turnpike in Lewiston.  The driver was traveling north when he was distracted and crossed into the breakdown lane.  He swerved to avoid a disabled vehicle that was in the breakdown lane and overcorrected, causing him to lose control of the vehicle and rollover, spilling asphalt he was hauling across both lanes.  The vehicle came to rest on its side, blocking both lanes of travel.  Northbound traffic was closed for approximately 3 ½ hours while crew members worked on removing the vehicle and the asphalt from the roadway. The driver was transported to Central Maine Medical Center for non-life-threatening injuries. 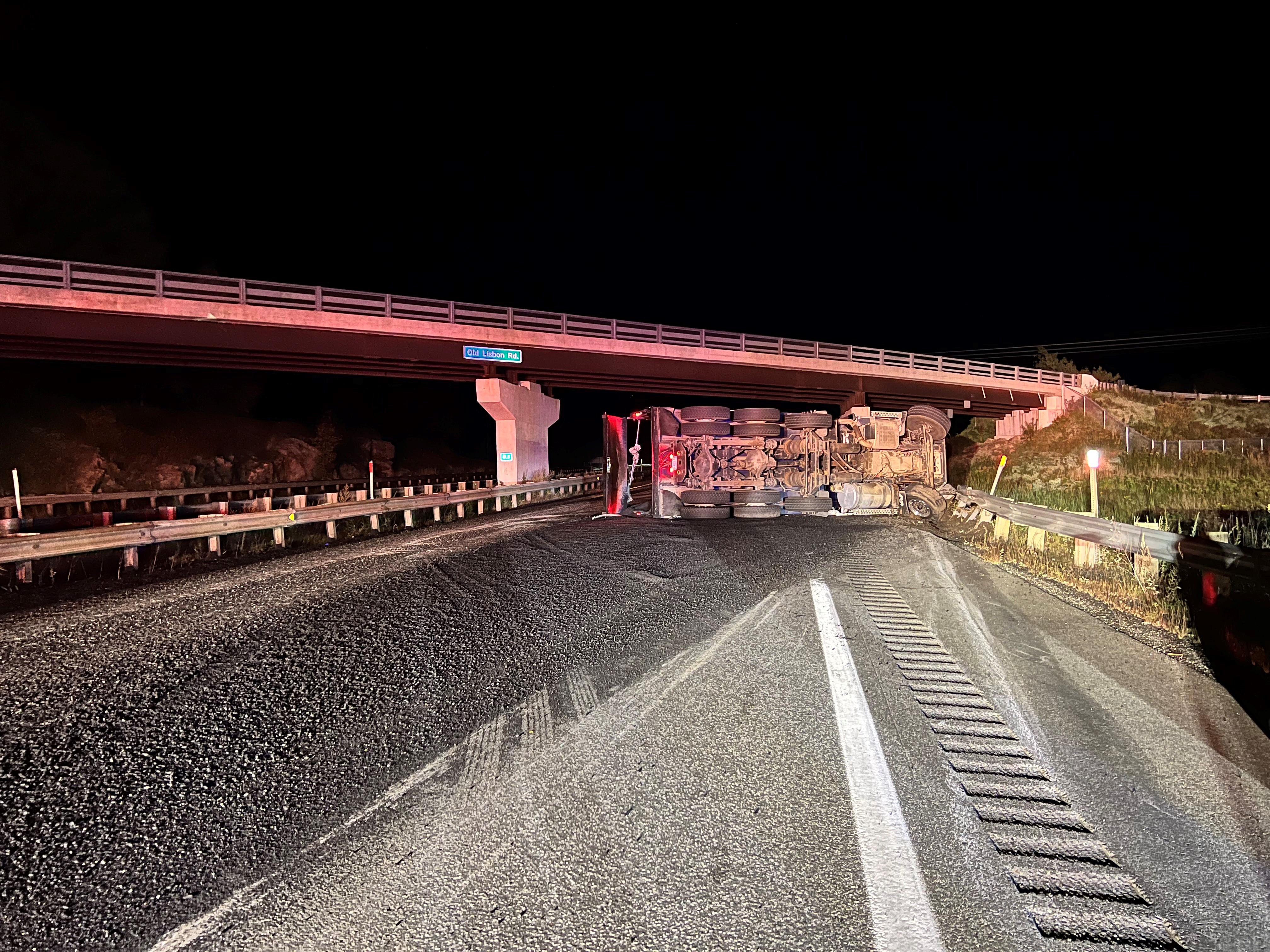 On 09/29/2022, Cpl. Ricci Cote arrested Timothy Meeks (34) formerly of Memphis, TN on the ME Turnpike southbound in Auburn.  He had been walking and refused to exit upon being warned and ordered to do so.  He was charged with Criminal Trespassing, Refusal to Submit to Arrest (Force), and Refusal to Sign a Uniform Summons and Complaint.  After being medically cleared at a local hospital, he was taken to the Androscoggin County Jail.  Cpl. Cote was assisted by Tpr. Ryan Keller of Troop K.

On 09/29/2022, Tr. Ellis stopped Ericka Leary (32) of Gray for an expired registration on the ME Turnpike northbound in Falmouth. She was found to not have a valid license. She was summonsed for an expired license and warned for the registration. The vehicle was towed.

On 09/30/2022, Tr. Ellis observed a vehicle speeding 122/70 northbound on the ME Turnpike in Saco. Sgt. Casey clocked the vehicle speeding 110/50 and stopped it in Portland. Tommy Guerrero (25) of Lewiston was charged with criminal speeding.

On 09/30/2022, Tr. Walp was following up on a traffic complaint. The complainant said if Troopers did not pull the vehicle over, they feared the driver would kill someone. Tr. Walp located the vehicle at MM 80 southbound where it was pulled into the breakdown lane. After further investigation, Tr. Walp arrested the male operator, Charles Driscoll (22) of Kittery and administered a breath test at the jail. Driscoll was booked into the Androscoggin County Jail and charged with OUI.

On 09/30/2022, Tr. Foley stopped Erik Maas (56) on I-95 south in Wells for erratic operation. Maas displayed signs of intoxication and Tr. Foley placed Maas under arrest for OUI. Maas was transported to York PD where he blew over the legal limit and posted bail. Cpl. Physic assisted.

On 10/01/2022, Cpl. Physic stopped Shayle Wormel in Saco for following too closely on I-95. Shayle showed signs of impairment and Cpl. Physic placed Shayle under arrest. Shayle took an intoxilyzer test and blew over the legal limit.

On 10/01/2022, Tr. Walp pulled Alexander Menezes (25) of Lewiston over for criminal speed. Upon further investigation, Menezes’ registration was past due over 150 days and the registration was suspended. Menezes was issued a summons and the vehicle was towed.

On 10/02/2022, Tr. Foley responded to a rollover crash on I-95 south in Portland. The operator, Jens Jensen-Reinke (30) suffered minor injuries. Jensen-Reinke displayed signs of intoxication. Tr. Foley placed Jensen-Reinke under arrest for OUI. Jensen-Reinke consented to a blood draw and results are pending.

On 10/02/2022, Tr. Anstett stopped Jessica Mercer (37) of West Paris for Criminal Speed on the Turnpike in Cumberland. Mercer was issued a summons.

On 10/02/2022, Tr. Anstett assisted with a family fight in the area of mile 25 northbound on the Turnpike. Tr. Anstett located the victim in Kennebunk. The investigation is ongoing.