On 09/21/2021, Cpl. Cote stopped Heidi Cook (42) on the ME Turnpike northbound in New Gloucester.  Her ME driver’s license was found to be suspended.  She was charged with Operating after Suspension and her vehicle was towed away.  Within an hour of the stop, he received a tip that she had left the tow company lot driving.  Cpl. Cote spotted her on Washington St. in Auburn.  She was arrested, her vehicle was towed away again by the same tow company, and she was taken to the Androscoggin County Jail where she was charged again with Operating after Suspension.

On 09/22/2021, Tr. Pescitelli initiated a traffic stop on a vehicle that ran a stop sign and cut him off on Rt. 27 in Augusta. After making contact with the operator, the male driver admitted to driving on a suspended license. The vehicle he was operating did not have an inspection sticker nor was it registered. It was also discovered the male had an active arrest warrant for failure to appear on an OAS charge from the prior month. Tr. Pescitelli issued multiple VSACs and placed the individual under arrest on the warrant.

On 09/22/2021, at approximately 2329 hours, Tr. LiBritz responded to the northbound service plaza in Kennebunk for a report of a stranded woman requesting assistance. It was determined her daughter had dropped her off at the plaza around 2100 hours. The woman stated her 22-year-old daughter appeared “out of it” and she was in a lot of fear. A file was issued to check her well-being. The woman advised Tr. LiBritz she was trying to get to a hotel for the night but was not having any luck. Tr. LiBritz made arrangements for the woman to stay at a hotel in Sanford because there was nowhere local for her to go. No taxis were available, so Tr. LiBritz offered assistance bringing her there. The woman was traveling with her cat, Mogli, and he had gotten loose, climbed a tree, and got on the top of the Kennebunk Service Plaza roof. Mogli would not come down and Tr. LiBritz climbed to the top of the roof and saved the stranded cat. After they were reunited, Tr. LiBritz transported them to the hotel in Sanford.

On 09/23/2021, at approximately 0140 hours, Sgt. Duda, Tr. LiBritz, Tr. Pescitelli, and Sgt. Pappas responded to a vehicle crash at the westbound toll both plaza on the Falmouth spur. A vehicle had crashed into the concrete barrier that divides the toll booths. The vehicle then burst into flames. The toll booth attendant that was inside the booth at the time of the crash was taken to Maine Medical Center with serious but non-life threatening injuries. The male operator, Ethan Chase (22) of Durham, was not injured and declined rescue. He was charged with Aggravated OUI. 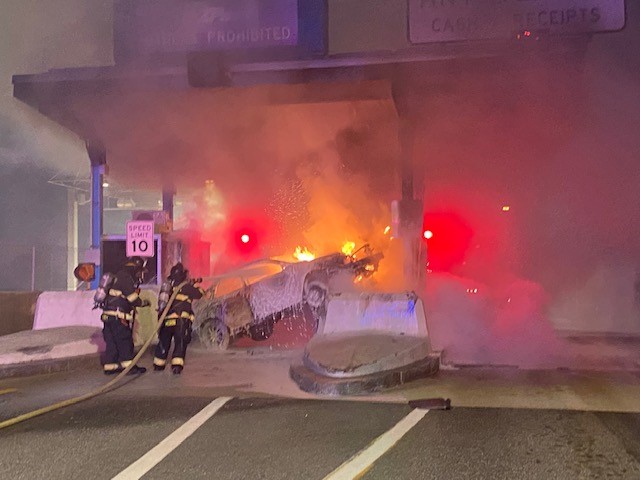 On 09/23/2021, Sgt. Duda assisted in a motor escort from Augusta to Bucksport for Deputy Luke Gross.

On 09/24/2021, Cpl. Cropper stopped Matthieu O'Rourke (43) of Manchester, NH for speeding northbound in Arundel. O'Rourke was summonsed for Operating Without a License.

On 09/25/2021, Cpl. Physic arrested Laciann Gilblair for OUI.  Laciann took an intoxilyzer and blew over the legal limit.

On 09/25/2021, Tr. Pescitelli responded to a MV crash near MM 105 southbound. Investigation revealed that the operator was driving too fast for the weather and roadway conditions which led to a loss of control of the vehicle. The vehicle spun about 2-3 times on the roadway before colliding with the median guardrail and eventually coming to rest. The operator and passenger were transported for minor injuries.

On 09/27/2021, Cpl. Physic arrested Peter Breitmaier for OUI.  Peter took an intoxilyzer test and blew over the legal limit.