On 08/23/2022, Tr. Keim responded to CMMC for a report of a domestic violence assault that occurred on the Maine Turnpike in the Augusta area.  After interviewing the female victim, who sustained bruises to her chin, shoulder, and arms, Tr. Keim, Cpl. Cote, Lewiston PD, and the Safe Streets Task Force were able to locate the suspect at the Ramada Inn in Lewiston. The 28-year-old male was arrested for domestic violence assault and was also charged with violating his bail, which he was on from a prior assault on the same victim.

On 08/26/2022, Sgt. Porter responded to the area of mile marker 50 SB for a crash. It was raining heavily at the time and there was vehicle debris in the breakdown lane, but the vehicles were gone. One of the vehicles involved was found just off exit 48 on Riverside Street in Portland, coming out of the Burger King drive-thru with heavy front-end damage and both front airbags deployed. The operator, Erik Williams (43) of Lewiston, was summonsed for OAS and the vehicle was towed.

On 08/27/2022, Tr. Ellis, Tr. Phillips, Sgt. Casey, and the Biddeford Fire Department responded to a vehicle fire on the ME turnpike northbound in Saco. The vehicle was a complete loss and led to an extended closure of multiple lanes while fire suppression was conducted. 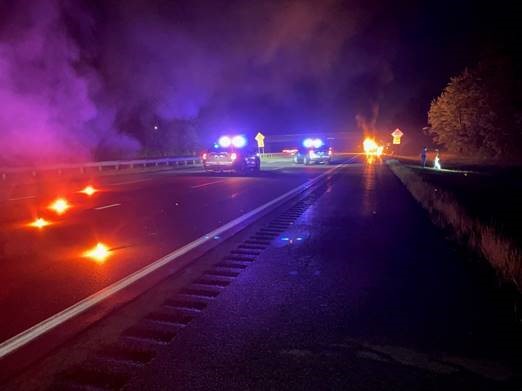 On 08/27/2022, Tr. Ellis stopped Francis Enwonwu (39) of Scarborough for criminal speeding 100/70 on the ME turnpike northbound in Kennebunk. He was summonsed for the speed.

On 08/27/2022, Tr. Ellis stopped Vladimil Ramirez (34) of Massachusetts for criminal speeding 106/70 on the ME turnpike southbound in Kennebunk. He was summonsed for the speed and an unsafe lane change.

On 08/28/2022, Tr. Phillips was conducting traffic enforcement on I95 in the Kennebunk area. While monitoring traffic Tr. Phillips had a vehicle pass him traveling at 106 mph in a 70-mph zone. Tr. Phillips conducted a traffic stop on the vehicle without issue. The driver was summonsed for criminal speed.

On 08/28/2022, Tr. Anstett responded to Rt. 202 in Alfred to conduct a crash reconstruction for Troop A. The investigation is ongoing at this time.