On 06/15/2020, Cpl. Cote stopped Diane Larson (36) of Auburn on Hotel Road in Auburn. Her vehicle registration was found to be Suspended for Tolls. She was charged with Operating with a Suspended Registration and her vehicle was towed.

On 06/15/2020, Tr. Darcy charged Patricia Sutkowski (59) of Saco with Operating after Suspension as the result of a traffic stop southbound on the turnpike in Wells.

On 06/15/2020, Tr. Darcy observed a stolen vehicle traveling northbound on the turnpike in Wells. Troopers Darcy, Welch, and Williams conducted a high risk stop on the vehicle in Kennebunk. The three male occupants were detained. The investigation revealed that the vehicle was still showing stolen out of Colorado. The driver knew the victim in the case, and it is believed there may have been a misunderstanding based on a language barrier. Tr. Darcy was unable to get in contact with the victim. The vehicle was towed, the occupants were released, and the agency in Colorado was notified. Charges may be filed based on speaking with the victim if contact can be made.

On 06/16/2020, Tr. Darcy was dispatched to a report of a male who pointed a firearm at a female in another vehicle while traveling on the turnpike in Kennebunk. Troopers Darcy and Spicer (Troop A) located the vehicle and conducted a high risk stop in York. The male was detained. The investigation revealed that the male was doing “dry fires” with his hands (no firearm in hand) as he had just had issues shooting at the range. The only firearm in his vehicle was locked in a safe in his trunk. The victim observed the male’s hand motions in her rearview mirror and believed the male was pointing a firearm at her. The victim did not wish to have the case submitted to the DA’s office. The male was warned about the scene that he caused due to his actions.

On 06/16/2020, Tr. Williams received a complaint of a vehicle crash and rollover at mile 3 northbound on I-95 in the town of Kittery. Troopers Williams, Darcy, and Wilkinson responded. Det. Bolton was in the area and arrived on scene first, and learned the crash was a hit-and-run. Tr. Williams learned a vehicle had struck the rolled-over vehicle and fled into the Kittery Rest Area. Det. Bolton and Tr. Darcy located the suspect vehicle and the occupants after a witness observed the driver hiding behind a dumpster. As a result of the investigation, Daniel Arpi (21) of North Berwick was charged with Driving to Endanger, Operating Without a License, and Leaving the Scene of a PD Crash.

On 06/17/2020, Cpl. Cote stopped John Peterson (49) of Manchester, NH on the ME Turnpike at mile 47 NB in Portland. He was charged with Criminal Speed for traveling 86 MPH in a posted 50 MPH construction zone.

On 06/17/2020, Tr. Williams stopped a vehicle for excessive speed (92 MPH in a 70 MPH zone) and unsafe lane changes on I-95 in the town of York. The vehicle attempted to quickly exit the turnpike in York as Tr. Williams was catching up to it. Tr. Williams observed numerous criminal indicators from the occupants and summoned the assistance of Tr. Fancy/K9 Dutch. Cpl. Cote and Tr. Darcy also responded. After a negative K9 response, Tr. Williams seized the vehicle and obtained a search warrant based in part on the fact K9 Dutch is not trained on Fentanyl. Troopers Williams, Darcy, and Fancy served the search warrant at National Wrecker Service in Eliot and located 140 grams of suspected Fentanyl along with $1905.00 in cash in the vehicle. Arrest warrants are pending for the two suspects, both from Lowell, MA. 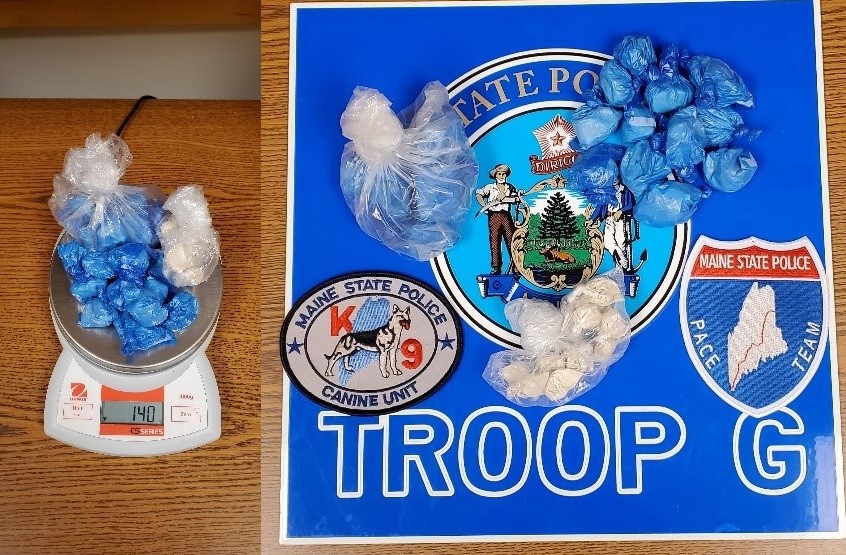 On 06/20/2020, Tr. Loder responded to a 911 call about an assault taking place in a vehicle stopped in the travel lane near the Exit 46 interchange. Tr. Loder located the female victim near the west tolls. The victim described how her boyfriend, Ryan Boles (25), punched her repeatedly and put her in a headlock before she was able to get out of the car. Tr. Reaser set up and stopped the car southbound in Biddeford. Boles was taken into custody and has been charged with (felony) DV Assault and VCR. Sgt. Burton assisted at both locations.

On 06/21/2020, Tr. Keim stopped Peter Ruger (58) of York for traveling 101 MPH in a posted 70 MPH zone in Kittery. Ruger admitted to his speed. Ruger was also charged with operating an unregistered motorcycle.

Tr. Physic summonsed Damien Barbour for Criminal Speed for going 84 MPH in a 50 MPH in an active construction zone.