On 01/03/2022, Cpl. Cropper stopped a speeding vehicle that was southbound in Gray. The driver, ABDUALLAHI ALI ISSAK (25) of Lewiston failed to produce a license, gave a false name and date of birth, and was violating three sets of bail conditions by being in direct contact with his victim of DV Assault, who was in the vehicle with him. ISSAK was transported to Cumberland County Jail for VCR x3, operating without a license (suspended in MA), and failure to give correct name and/or DOB.

On 01/04/2022, Cpl. Cropper (Troop G) and Tpr. Jack Dow (Troop K) assisted Wells PD with locating a suicidal female who was southbound on the Turnpike from Wells. The female left a suicide note at her home, took her S&W 357 revolver, went to Wells Beach, and consumed approximately 25 pills of Tramadol. The female fled from Wells Beach after being confronted by an ex-boyfriend who was trying to get her help. Cpl. Cropper and Tpr. Dow stopped the vehicle at the southbound scales and called for rescue. Narcan was given to the female by rescue to help prevent an overdose, as the female wanted to go to the hospital with Cpl. Cropper. The female was transported to Portsmouth Regional Hospital and was admitted.

On 01/07/2022, Tpr. Parks stopped Gregory Inglis (60) of Ontario for operating an over-limit commercial vehicle at night on the ME Turnpike southbound in Falmouth. He was found to be lacking a required escort, off route, and had failed to acquire ME Turnpike authorization. Tpr. Ellis assisted by conducting a commercial vehicle inspection. Inglis was summonsed and parked for the night.

On 01/08/2022, Section One Troopers responded to mile 25 southbound for a report of a vehicle traveling north in the southbound lane that crashed into a vehicle head on. Charity Reynolds (45) was charged with OUI, driving to endanger, and violating conditions of release. Specialist Allen assisted with the OUI investigation. 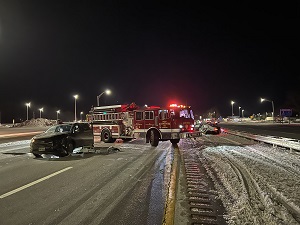