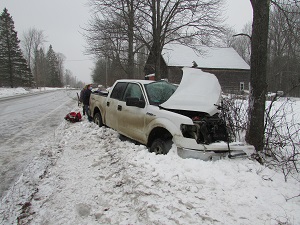 Maine State Police are investigating a fatal crash that occurred in Topsfield.

On January 14, 2021, at approximately 9:15 a.m., Maine State Police responded to a fatal crash on Route 1 in Topsfield involving a 2020 Peterbilt tractor-trailer, owned by C&C Trucking incorporated out of Lincoln, hauling logs and a 2009 Ford pick-up truck, owned by Bushwacker and Sons Logging incorporated out of Cary. The operator of the pick-up truck, Tyler Dwyer, 30, of Houlton, was deceased at the scene and a passenger of that truck was injured. The tractor-trailer was driven by Gregory Worster, 58, of Kingman. Worster was driving north and Dwyer was traveling south and the collision occurred in the northbound lane. Failure to maintain the proper lane and fatigue appear to be factors in this crash.